You are here: Home › Climate Change › News › Forests set to return to Canada’s extreme north
By Will Parker on September 24, 2012 in Climate Change, News 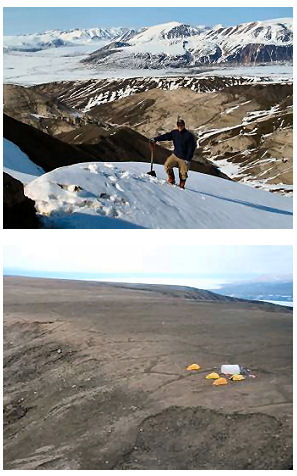 University of Montreal scientists studying the fossilized remains of an ancient forest inside the Arctic circle think that our warming climate could soon see the return of hickory, oak, spruce and willow to this hostile environment.

The fossilized forest, located on Bylot Islandin Nunavut, is between 2.6 and 3 million years old according to paleomagnetic analyses (looking at how the Earth’s magnetic field has affected the magnetic sediment in rocks).

Alexandre Guertin-Pasquier, of the University of Montreal’s Department of Geography, said the ancient wood samples have been preserved throughout the eons in peat and by permafrost. “We studied the sediments in the forest and discovered pollen that are usually found in climates where the annual average temperature is around 0 degrees Celsius [32 Fahrenheit],” he explained. By comparison, current average conditions on Bylot Island are around -15& #176;C (5& #176;F).

But Guertin-Pasquier thinks our warming climate could one day see the return of these forests. “According to the data model, climate conditions on Bylot Island will be able to support the kinds of trees we find in the fossilized forest that currently exist there, such as willow, pine and spruce. I’ve also found evidence of a possible growth of oak and hickory near the study site during this period,” he said. “Although it would of course take time for a whole forest to regrow, the findings show that our grandchildren should be able to plant a tree and watch it grow.”

Guertin-Pasquier hopes to investigate the Bylot Island site further to answer some of the questions that continue to puzzle scientists. “There is so much mystery that surrounds this forest – for example, how these trees managed to survive the relentless dark of the Arctic winter.”

Psychopaths revealed via smell test
Antibiotic oomph: the eyes have it