You are here: Home › Health › Mental Health › News › Female brain frazzled by mild dehydration
By Will Parker on February 21, 2012 in Mental Health, News 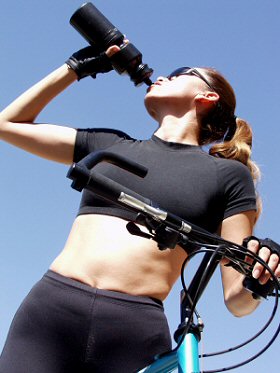 Mild dehydration – which occurs when the body has lost just 1.5 percent of its normal water content – can cause fatigue, tension and anxiety in both genders, but the authors of two surprising new studies say the adverse changes in mood for women were particularly dramatic. The studies were conducted at the University of Connecticut and published in the Journal of Nutrition and the British Journal of Nutrition.

The research involved separate groups of young women and men aged in their early 20s who were neither high-performance athletes nor sedentary. All of the participants walked on a treadmill to induce dehydration, and all of the subjects were hydrated the evening before the evaluations commenced. The subjects were then put through a battery of cognitive tests that measured vigilance, concentration, reaction time, learning, memory, and reasoning. These results were then compared against a separate series of tests when the individuals were not dehydrated.

In the tests involving the young women, mild dehydration caused headaches, fatigue, and difficulty concentrating. The female subjects also perceived tasks as more difficult, although there was no substantive reduction in their cognitive abilities.

In the tests involving the young men, mild dehydration caused some difficulty with mental tasks, particularly in the areas of vigilance and working memory. While the young men also experienced fatigue, tension, and anxiety when mildly dehydrated, adverse changes in mood and symptoms were “substantially greater in females than in males,” according to the researchers.

“Women appear to be more susceptible to the adverse effects of low levels of dehydration than men,” says Harris Lieberman, one of the studies’ co-authors. “These adverse mood changes may limit the motivation required to engage in even moderate aerobic exercise. Mild dehydration may also interfere with other daily activities, even when there is no physical demand component present.”

Lieberman speculates that the mental effects of dehydration could be part of an ancient warning system protecting humans from more dire consequences, and alerting them to the need for water to survive. “Our thirst sensation doesn’t really appear until we are 1 or 2 percent dehydrated. By then dehydration is already setting in and starting to impact how our mind and body perform,” added co-researcher Lawrence E. Armstrong. “Dehydration affects all people, and staying properly hydrated is just as important for those who work all day at a computer as it is for marathon runners.”