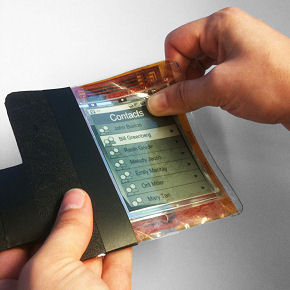 Researchers from Queen’s University in Canada have developed a prototype flexible smartphone interface that allows users to interact with applications on the phone by bending and manipulating the display.

The prototype uses a 9.5 cm (diagonal) thin film flexible E Ink display that has been customized with pressure sensors that monitor the user’s actions and interact directly with the phone software.

“This computer looks, feels and operates like a small sheet of interactive paper. You interact with it by bending it, flipping the corner to turn pages, or writing on it with a pen,” explained Roel Vertegaal, from Queen’s Human Media Lab. Vertegaal will demonstrate the prototype at the Computer Human Interaction 2011 conference in Vancouver next week. In the meantime, a video of the device in action is available.

Vertegaal acknowledges that the case for the use of flexible over rigid screens is not necessarily based on the superior efficiency of interactions. While rigid screens may continue to have the edge in terms of interaction efficiency for some time, he believes there are sufficient practical and interactional reasons for flexible displays to achieve mass adoption as they closely approximate the look and feel of paper documents. “This is the future. Everything is going to look and feel like this within five years,” he said.