You are here: Home › Environment › News › Deforestation goes into hyperdrive with rising gold price
By Will Parker on April 27, 2011 in Environment, News 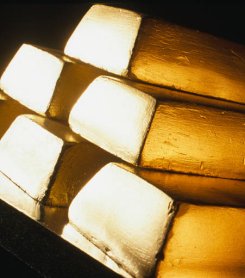 Published in the journal PLoS ONE, the study used NASA satellite imagery combined with economic analyses of gold prices and mercury imports to document the forces responsible for deforestation in Peru’s Madre de Dios region. It reveals that around 15,200 acres of pristine, biologically diverse forest and wetlands were cleared at two large mining sites between 2003 and 2009, with a dramatic increase in deforestation occurring in the last three years.

Duke geospatial specialist, Jennifer Swenson, says that much of the deforestation has been caused by unregulated, artisanal mining by miners who are often among the poorest and most marginalized members of their society. “These are small-time miners; there is no big ‘Goliath’ mining company to blame,” she explains. The miners have limited knowledge of mining’s environmental or human health effects and rarely have safeguards to limit the release of the mercury they use to process their gold into the air, soil or water.

The mercury contaminates local water and soil, and ravages the nervous system of miners and their families, but the risks extend far beyond the local area, Swenson says. “Small-scale gold mining is the second-largest source of mercury pollution in the world, behind only the burning of fossil fuels. Virtually all mercury imported to Peru is used for artisanal gold mining and imports have risen exponentially since 2003, mirroring the rise in gold prices.”

The study acknowledges that it is difficult for Peru’s government to monitor and control all small-scale artisanal mining within its borders, but suggests that another approach may be to be start limiting mercury imports.