You are here: Home › Environment › News › Naked chicks baffle penguin boffins
By Will Parker on April 11, 2011 in Environment, News 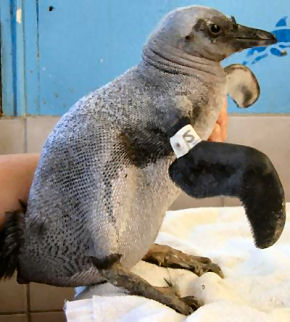 Large numbers of young penguins in colonies around the Atlantic are suffering what is known as feather-loss disorder and scientists are baffled as to what might be causing the condition. A report on the disorder appears in the journal Waterbirds.

“Feather-loss disorders are uncommon in most bird species, and we need to conduct further study to determine the cause of the disorder and if this is in fact spreading to other penguin species,” said report author P. Dee Boersma of the Wildlife Conservation Society (WCS).

Meanwhile, on the other side of the South Atlantic, researchers from the WCS observed feather-loss disorder in the chicks of wild Magellanic penguins at four different sites along Argentina’s coastline.

In both instances, the chicks with feather-loss disorder grew more slowly than feathered chicks. Featherless chicks were also smaller in size and weight than feathered chicks. Boersma says these disparities are due to the increased energy spent in thermoregulation in the absence of an insulating coat of feathers.

The researchers say pathogens, thyroid disorders, nutrient imbalances or genetics could be to blame. “We need to learn how to stop the spread of feather-loss disorder, as penguins already have problems with oil pollution and climate variation,” concluded Boersma. “It’s important to keep disease from being added to the list of threats they face.”