You are here: Home › News › Physics › First demonstration of coherent control of a quantum multi-resonator architecture
By Will Parker on February 1, 2011 in News, Physics 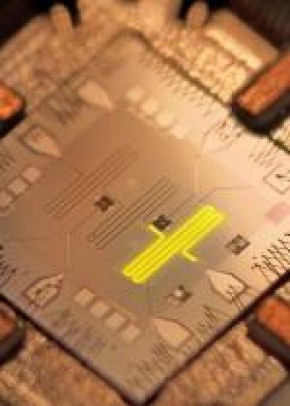 Physicists at the University of California – Santa Barbara have put a new slant on the shell game by demonstrating the ability to hide and shuffle “quantum-mechanical peas” – in this case single microwave photons – under and between three microwave resonators acting as quantized shells.

Their paper, published in Nature Physics, is the first demonstration of coherent control of a multi-resonator architecture. This has been a holy grail among physicists studying photons at the quantum-mechanical level for more than a decade.

The apparatus makes use of two superconducting quantum bits (qubits) to move the photons between the resonators. The research team believe that the qubits – the quantum-mechanical equivalent of the classical bits used in a common PC – will play a key role in the eventual development a quantum computer.

“This is an important milestone toward the realization of a large-scale quantum register,” said researcher Matteo Mariantoni. “It opens up an entirely new dimension in the realm of on-chip microwave photonics and quantum-optics in general.”

The modern take on the shell game happens on a chip where three resonators of a few millimeters in length are coupled to two qubits. “The architecture studied in this work resembles a quantum railroad,” explained Mariantoni. “Two quantum stations – two of the three resonators – are interconnected through the third resonator which acts as a quantum bus. The qubits control the traffic and allow the shuffling of photons among the resonators.”

Not content with mimicking the shell game, the researchers played a more complex diversion known as the Towers of Hanoi. In the quantum-mechanical version of the Towers of Hanoi, the three posts are represented by the resonators and the disks by quanta of light with different energy. “This game demonstrates that a truly Bosonic excitation can be shuffled among resonators – an interesting example of the quantum-mechanical nature of light,” said Mariantoni.

Related:
Getting to grips with spookiness
Robustness of quantum entanglement in photosynthesis surprises researchers
Physicists get a glimpse of fault-tolerant qubits