You are here: Home › Mind and Brain › News › Fear of spiders, snakes is learnt… very quickly
By Will Parker on January 25, 2011 in Mind and Brain, News 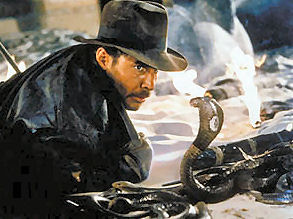 A new meta-study appearing in Current Directions in Psychological Science reviews research with infants and toddlers, and finds that we aren’t born afraid of spiders and snakes, but we can learn these fears very quickly. One theory about why we fear spiders and snakes is that natural selection may have favored people who stayed away from these potentially poisonous creatures.

Interestingly, several studies have found that it’s easier for both humans and monkeys to learn to fear evolutionarily threatening things than non-threatening things. For example, a study from Sweden showed that you can teach people to associate an electric shock with either photos of snakes and spiders or photos of flowers and mushrooms – but the effect lasts a lot longer with the snakes and spiders. Similarly, research from the US shows that monkeys that are raised in the lab aren’t afraid of snakes, but they’ll learn to fear snakes much more readily than flowers or rabbits.

The authors of the new meta-study have also conducted their own experiments. In one, they showed infants as young as 7 months old two videos side by side – one of a snake and one of something non-threatening, such as an elephant. At the same time, the researchers played either a fearful voice or a happy voice. The babies spent more time looking at the snake videos when listening to the fearful voices, but showed no signs of fear themselves.

“What we’re suggesting is that we have these biases to detect things like snakes and spiders really quickly, and to associate them with things that are yucky or bad, like a fearful voice,” says co-author Vanessa LoBue of Rutgers University.

“The original research [suggests] two important things that make snakes and spiders different,” LoBue continues. “One is that we detect them quickly. The other is that we learn to be afraid of them really quickly.” Her research on infants and young children suggests that this is true early in life, too – but not innate, since small children aren’t necessarily afraid of snakes and spiders.