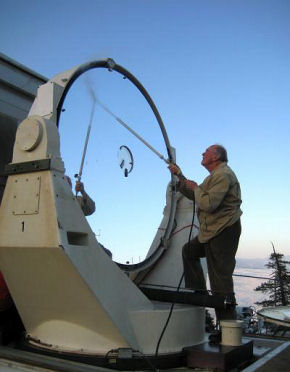 Betelgeuse, the bright red supergiant star in the constellation Orion, has shrunk by more than 15 percent over the past 15 years, and astronomers aren’t sure why. Long-term monitoring by the University of California – Berkeley’s Infrared Spatial Interferometer (ISI) on the top of Mt. Wilson in Southern California shows that Betelgeuse has shrunk by a distance equal to the orbit of Venus.

“To see this change is very striking,” said Charles Townes, a UC Berkeley professor emeritus of physics. “We will be watching it carefully over the next few years to see if it will keep contracting or will go back up in size.” Adding to the mystery, Townes’ colleague, Edward Wishnow, points out that Betelgeuse’s visible brightness (magnitude), which is monitored regularly by members of the American Association of Variable Star Observers, has shown no significant dimming over the past 15 years.

The ISI has been focusing on Betelgeuse for more than 15 years in an attempt to learn more about these giant massive stars and to discern features on the star’s surface. Wishnow speculates that the measurements may be affected by giant convection cells on the star’s surface that are like convection granules on the sun, but so large that they bulge out of the surface. Townes and former graduate student Ken Tatebe observed a bright spot on the surface of Betelgeuse in recent years, although at the moment, the star appears spherically symmetrical.

“But we do not know why the star is shrinking,” Wishnow said. “Considering all that we know about galaxies and the distant universe, there are still lots of things we don’t know about stars, including what happens as red giants near the ends of their lives.”

Betelgeuse was the first star ever to have its size measured, and even today is one of only a handful of stars that appears through the Hubble Space Telescope as a disk rather than a point of light. In1921, Francis G. Pease and Albert Michelson used optical interferometry to estimate its diameter was equivalent to the orbit of Mars. Last year, new measurements of the distance to Betelgeuse raised it from 430 light years to 640, which increased the star’s diameter from about 3.7 to about 5.5 AU.

“Since the 1921 measurement, its size has been re-measured by many different interferometer systems over a range of wavelengths where the diameter measured varies by about 30 percent,” Wishnow said. “At a given wavelength, however, the star has not varied in size much beyond the measurement uncertainties.”

Townes added that the measurements cannot be compared anyway, because the star’s size depends on the wavelength of light used to measure it. This is because the tenuous gas in the outer regions of the star emits light as well as absorbs it, which makes it difficult to determine the edge of the star.

The ISI that Townes and his colleagues first built in the early 1990s sidesteps these confounding emission and absorption lines by observing in the mid-infrared with a narrow bandwidth that can be tuned between spectral lines. Using a laser as a common frequency standard, the ISI interferometer combines signals from telescope pairs in order to determine path length differences between light that originates at the star’s center and light that originates at the star’s edge.

“We observe around 11 microns, the mid-infrared, where this long wavelength penetrates the dust and the narrow bandwidth avoids any spectral lines, and so we see the star relatively undistorted,” explained Townes. “We have also had the good fortune to have an instrument that has operated in a very similar manner for some 15 years, providing a long and consistent series of measurements that no one else has. The first measurements showed a size quite close to Michelson’s result, but over 15 years, it has decreased in size about 15 percent, changing smoothly, but faster as the years progressed. Whenever you look at things with more precision, you are going to find some surprises and uncover very fundamental and important new things.”