You are here: Home › News › New findings challenge long-held assumptions about flightless bird evolution
By Will Parker on September 4, 2008 in News 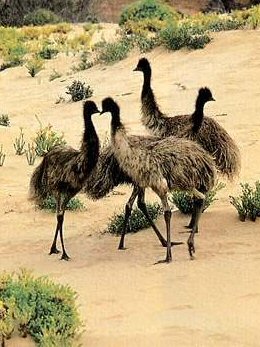 Scientists assumed that a single flightless common ancestor of the ratites lived on the supercontinent of Gondwana, which slowly broke up into Africa, South America, Australia and New Zealand; once divided, the ancestor species evolved slightly in each new location to produce the differences among the present-day ratites, Braun explained. But in light of this new information, he said it’s more likely that the ratites’ ancestors distributed themselves among the southern continents after the breakup of Gondwana, which began about 167 million years ago, in a much more obvious way. They flew.

The study, appearing in the Proceedings of the National Academy of Sciences, has several important implications, says Braun. He contends it means some ratites, like the emus, are much more closely related to their airborne cousins, the tinamous, than they are to other ratites. And second, it means the ratites are products of parallel evolution – different species in significantly different environments following the exact same evolutionary course.

Although these new revelations teach evolutionary scientists a great deal, they also pose a great many new questions. For example, why did these birds evolve into such similar organisms in such different environments? “To know for sure, we’ll have to go into the lab and really study the genetics underlying the ratites’ developmental pathway,” Braun said. “But nobody would have asked that question without the type of data we’ve collected, which raises the question in the first place.”