You are here: Home › News › Dwarf Star Activity Puzzles Astronomers
By Will Parker on December 6, 2007 in News 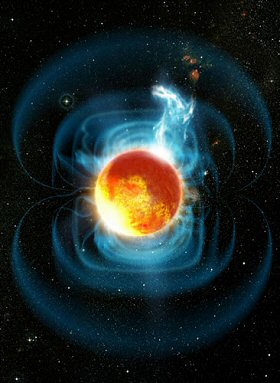 Astronomers have been observing an unusual M-dwarf star with an extremely active and complex magnetic field that is stronger than our own Sun’s, and a huge hydrogen hot-spot that covers half of its surface.

Typically, M-dwarf stars – the most common type of star in the galaxy – are cold, quiet and dim. But a team of astronomers led by Edo Berger, a Carnegie-Princeton postdoctoral fellow, found one M-dwarf that simply doesn’t conform.

Located in the constellation Boötes, the star is known as TVLM513-46546 and is about 35 light-years distant. The astronomers combined radio data from the Very Large Array, optical spectra from the Gemini North 8-meter telescope, ultraviolet images from the orbiting Swift observatory, and NASA’s Chandra X-ray Observatory to make their observations.

“With such a unique set of observations you always expect to find the unexpected,” said Berger in the Astrophysical Journal. “But we were shocked at the level of complexity that this object exhibits.”

The star has a steady radio emission that is interrupted with spectacular, minute-long, firework displays, which come from collisions of magnetic fields in the corona of the star. The annihilation of magnetic energy produces giant short-circuits. The team also observed soft X-ray emissions and an X-ray flare.

Also for the first time, the group charted an optical hydrogen-alpha emission that is periodic and comes from a large hot spot. The two-hour emission period matches the two-hour rotation period of the star. “The periodic signal comes from a hot spot that covers half of the surface of the star like a giant light bulb that rotates in and out of our field of view,” said Berger. “We still do not know why only half of the star is lit up in hydrogen and if this situation remains unchanged over days, weeks, years, or centuries.”

Objects like TVLM513-46546 were once thought to have little or no magnetic field activity. “Theory has always said that as we look at cooler and cooler stars, the coolest will be essentially dead,” said Berger. “It turns out that stars like TVLM513-46546 have very complex magnetic activity around them, activity more like our Sun than that of a star that is barely functional.”

This star’s complicated magnetic field environment and hot spot may indicate some unusual activity beneath the star’s surface or possibly the existence of a still-hidden companion. The idea of an unseen companion as an explanation for the star’s magnetism is an intriguing one, says Berger, but no such object has yet been detected. “The main idea to consider here is an analogy to other systems where the presence of a companion directly or indirectly excites magnetic activity,” he said.

In the Sun, the magnetic field is produced by a dynamo that arises from a complex transfer of heat from the center to the surface by radiation and convection. By contrast, an ultracool dwarf like TVLM513-46546 transports heat only by convection, like water boiling in a pot. Such a simple structure has been predicted to generate a very basic magnetic field structure, perhaps more like the Earth’s than the complex fields we see on the Sun. Why TVLM513-46546 has such a complex field and activity remains a mystery.

To find out if this star is an oddity, or a typical prototype of ultracool dwarfs, the researchers plan to continue observations of other such stars. Berger also notes that he would like to get more observations to try and spot any possible companions to such stars.

Between The Sheets
Neuroscientists Map Violent Media’s Effects On Brain