You are here: Home › News › Boffin Ponders Cultural Manipulation By Cat Parasite
By Will Parker on August 4, 2006 in News 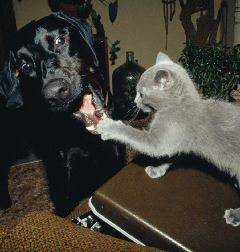 Kevin Lafferty, a U.S. Geological Survey scientist at UC Santa Barbara, writes in the current issue of theProceedings of the Royal Society that while little is known about the causes of cultural change, behavioral manipulation by the common brain parasite may be a factor. “In populations where this parasite is very common, mass personality modification could result in cultural change. The geographic variation in the latent prevalence of T. gondii may explain a substantial proportion of human population differences we see in cultural aspects that relate to ego, money, material possessions, work and rules.”

Phew. Although this might sound like science fiction, it is a logical outcome of how natural selection leads to effective strategies for parasites to get from host to host. T. gondii is a parasite of cats, and while modern humans are a dead-end host for the parasite, toxoplasma appears to manipulate personality by the same adaptations it normally uses to complete its lifecycle. The typical lifecycle of the parasite involves a cat and its prey; starting as eggs shed in an infected cat’s feces, inadvertently eaten by a warm-blooded animal, such as a rat. The infected rat’s behavior is altered by the parasite so that it becomes more active, less cautious and more likely to be eaten by a cat, where the lifecycle begins again. After producing mild flu-like symptoms in humans, the parasite tends to remain in a dormant state in the brain, although new research is suggesting that the parasite may in fact be linked to schizophrenia.

The subtle long-term effects on an individual’s personality were reported by researchers in the Czech Republic some years ago. This inspired Lafferty to explore whether a shift in the average, or aggregate, personality of a population might occur where T. gondii has infected a higher proportion of individuals. Infection with T. gondii varies considerably from country to country but in some, nearly all adults are infected.

To explore further, Lafferty used published data on cultural dimension and aggregate personality for countries where there were also published data on the prevalence of T. gondii antibodies in women of childbearing age. T. gondii is associated with different, often opposite, behavioral changes in men and women, but both genders exhibit guilt proneness (a form of neuroticism). Lafferty’s analysis found that countries with high T. gondii prevalence did have a higher aggregate neuroticism score, and western nations with high prevalence also scored higher in the “neurotic” cultural dimensions of “masculine” sex roles and uncertainty avoidance.

Lafferty believes he has just scratched the surface and the effects could be much more profound and widespread. “Different responses to the parasite by men and women could lead to many additional cultural effects that are, as yet, difficult to analyze,” he mused. He also suggested that because climate affects the persistence of infectious states of T. gondii in the environment, it helps drive the geographic variation in the parasite’s prevalence by increasing exposure risk. The parasite’s eggs can live longer in humid, low-altitude regions, especially at mid-latitudes that have infrequent freezing and thawing. Cultural practices of food preparation such as rare or undercooked meats, or poor hygiene, can increase exposure to infection, as can having cats as pets. “Toxoplasmosis is one of many factors that may influence personality and culture, which may also include the effects of other infectious diseases, genetics, environment and history,” he concluded.