You are here: Home › News › Astronomers Cop An Eyeful Of Star Explosion
By Will Parker on July 21, 2006 in News 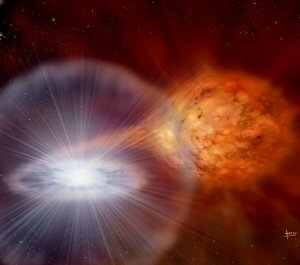 Astronomers from the UK and Germany have detected a spectacular nuclear explosion that created a blast wave traveling at a thousand miles per second. The explosion burst forth from the surface of a star 5,000 light years from Earth and was discovered, as reported in Nature, by a collective of the world’s telescopes arranged into arrays.

It was in early February that a team of Japanese astronomers first reported that the brightness of the star dubbed RS Ophiuchi had intensified, and become clearly visible in the night sky. Such episodes had been reported previously over the last 100 years, but 20 years had passed since the last flare-up. These factors were excuse enough to train some of the world’s most powerful telescopes on the massive explosion, as astronomers were eager to discover clues as to the cause of the explosion, and what the fallout from such a conflagration might be.

Dr Tim O’Brien, from the University of Manchester’s Jodrell Bank Observatory, explains how he put in an urgent request to view the explosion with the VLBA, “Our first observations, made only two weeks after the explosion was reported, showed an expanding blast wave already comparable in size to Saturn’s orbit around the Sun. However, we needed to use the world’s most powerful radio telescopes because, from a distance of 5,000 light years, its apparent size in the sky was only 5 millionths of a degree – the size of a football seen from 1,700 miles away.”

O’Brien, a veteran of RS Oph’s 1985 outburst, added that: “The blast wave resulted from a huge nuclear explosion which took place on the surface of one of a pair of stars, about 5,000 light years from Earth, which are closely circling one another. Gas captured from one star, a red giant, builds up on the surface of its white dwarf companion.”

Professor Mike Bode, of Liverpool John Moores University, explains what follows the build up of gas: “Eventually enough gas collects on the white dwarf for thermonuclear reactions to begin, similar to those which power the Sun but which runaway into a massive explosion. In less than a day, its energy output increases to over 100,000 times that of the Sun, and the gas [almost equaling the mass of the Earth] is thrown into space at speeds of several thousand km/second. This ejected matter then slams into the extended atmosphere of the bloated red giant and sets up blast waves that accelerate electrons to almost the speed of light. The electrons release radio waves as they move through a magnetic field; that are then picked up by the telescope arrays.”

The blast put on quite a dynamic show for the astronomers, as Dr Richard Porcas, of the Max Planck Institute for Radio Astronomy in Bonn, discovered. “A week after our first observations, we combined telescopes across Europe with two in China and another in South Africa and were surprised to find that the blast wave had become distorted,” explained Porcas. “Over the next few months our observations have shown it turning from a ring into a cigar-like shape. It’s going to need a lot more work to understand exactly what causes this, but either the explosion shoots jets of matter in opposite directions or somehow the atmosphere of the red giant is shaping the ejected material.”

Using MERLIN and the VLA, Dr Stewart Eyres, of the University of Central Lancashire, measured the brightness of the radio source, and was surprised by its intensity. “During this outburst, our first observations with the UK’s MERLIN system were made only four days after the outburst and showed the radio emission to be much brighter than expected. The later behavior suggests a complex mix of emission from relativistic particles and hot gas in the expanding remnant of the explosion.”

The outburst appears to represent a cycle, which means that there could be yet another flare-up after enough gas builds up on the white dwarf. But one question now puzzling astronomers is whether the white dwarf expels all of its energy in the explosion, or whether it retains some. If the latter is true, then it means that it could be increasing its mass. “If the white dwarf is increasing in mass then it will eventually be ripped apart in a titanic supernova explosion and the cycle of outbursts will come to an end,” explained Dr. O’Brien.