You are here: Home › News › High Hopes For High Altitude Broadband
By Will Parker on July 18, 2006 in News 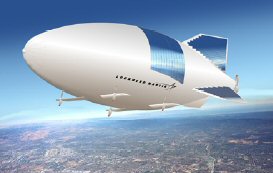 Broadband communications may be about to get a whole lot faster and cheaper, thanks to high-altitude platforms (HAPs) that can relay wireless and optical communications to remote areas. The revolutionary CAPANINA project is the brainchild of a consortium drawn from Europe and Japan and led by the University of York, UK. The group will converge on the latter’s territory in late October, where they will formally present their project at York HAP Week.

The CAPANINA project isn’t limited to any one kind of HAP, with a variety of aerial contraptions being considered for use depending upon the application. “So far, we have considered a variety of aerial platforms, including airships, balloons, solar-powered unmanned planes and normal airplanes – the latter will probably be particularly suited to establish communications very swiftly in disaster zones,” said Dr David Grace, CAPANINA’s Principal Scientific Officer.

Other potential HAP vehicle designs and optical communications systems will be presented by HAPCOS (High Altitude Platforms for Communications and Other Services), which will feature work from leading European researchers. “There are a number of projects worldwide that are proving the technology and we want to convince the telecommunications and the wider community of its potential. We are particularly keen to attract aerial vehicle providers,” said Tim Tozer, Chair of HAPCOS.

The new innovative communications system, say scientists, could provide inexpensive broadband connections to isolated areas, with data rates expected to be 2,000 times faster than traditional dialup and 100 times faster than current “wired” ADSL broadband. “The potential of the system is huge, with possible applications ranging from communications for disaster management and homeland security, to environmental monitoring and providing broadband for developing countries,” said Dr Grace.