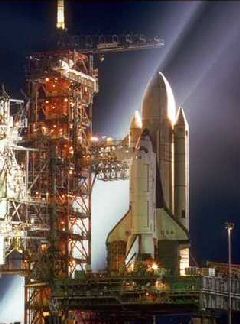 While scientists are yet to produce the likes of a Borg bio-ship, a new self-healing spacecraft being developed by the Department of Aerospace Engineering at the University of Bristol in England, shows that science often follows in the footsteps of science fiction. Building a spacecraft is a complex task, even more so when the lives of astronauts are at stake. They are precision pieces of engineering that have to survive in the airless environment of space, where temperatures can swing from hundreds of degrees Celsius, to hundreds of degrees below zero, in moments. Once a spacecraft is in orbit, engineers on the ground have virtually no chance of repairing anything that breaks. But what if the engineers didn’t have to?

Funded by European Space Agency’s (ESA) General Studies Programme, the new study into self-healing spacecraft has allowed engineers to take a step towards that amazing possibility. The scientists involved said that they looked to nature for their inspiration.

“When we cut ourselves we don’t have to glue ourselves back together, instead we have a self-healing mechanism. Our blood hardens to form a protective seal for new skin to form underneath,” says Dr Christopher Semprimoschnig, a materials scientist at ESA, who oversaw the study. Dr Semprimoschnig said that he imagined such cuts as analogous to the wear-and-tear suffered by spacecraft.

Such technology would be an invaluable safeguard for space missions, as even the smallest of breaches in a ship’s superstructure can lead to catastrophic failure. Extreme temperatures can cause small cracks to open, as can impacts by micrometeoroids – small dust grains travelling at speeds of several kilometres per second. Over the lifetime of a mission the cracks build up, weakening the spacecraft until a disaster becomes inevitable.

So, just how do you get a spacecraft to self-heal? The engineering may prove to be difficult, but the beauty of the concept itself is in its simplicity. The challenge for Semprimoschnig was to replicate the human process of healing small cracks before they can open up into anything more serious. He and the team at Bristol did it by replacing a few percent of the fibres running through a resinous composite material, similar to that used to make spacecraft components, with hollow fibres containing adhesive materials. Ironically, to make the material self-repairing, the hollow fibres had to be made of an easily breakable substance: glass. “When damage occurs, the fibres must break easily otherwise they cannot release the liquids to fill the cracks and perform the repair,” said Semprimoschnig.

In humans, the air chemically reacts with the blood, hardening it. In the airless environment of space, alternate mechanical veins have to be filled with liquid resin and a special hardener that leak out and mix when the fibres are broken. Both must be runny enough to fill the cracks quickly and harden before it evaporates.

Don’t hold your breath waiting to see how the new “skin” holds up in space, as development still has some way to go yet. “We have taken the first step but there is at least a decade to go before this technology finds its way onto a spacecraft,” says Semprimoschnig, who believes that larger scale tests are now needed.

There are a number of benefits associated with a self-healing spacecraft. First, ships could stay out on Earth orbits for double the time they do now, which would roughly halve the cost of the mission. Second, doubling a ship’s lifetime means that mission planners could contemplate missions to far-away destinations in the solar system that are currently too risky. A new era of more reliable spacecraft could be just what the struggling space industry needs to move ahead. What’s next? Astronauts assimilating with their craft?