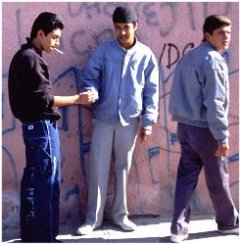 Researchers at the University of Southern California say malnutrition in the first few years of life leads to antisocial and aggressive behavior throughout childhood and late adolescence. “These are the first findings to show that malnutrition in the early postnatal years is associated with behavior problems through age 17,” said Jianghong Liu, lead author of the study which appears in the American Journal of Psychiatry. “Identifying the early risk factors for this behavior in childhood and adolescence is an important first step for developing successful prevention programs for adult violence,” she said. For 14 years, researchers followed the nutritional, behavioral and cognitive development of more than 1,000 children who lived on Mauritius, an island in the Indian Ocean off the coast of Africa.

The children’s intelligence level and cognitive ability were also tested, and social workers visited their homes to come up with a so-called adversity score that summarized factors such as the income, occupation, health, age and education levels of their parents and their overall living conditions. At ages 8, 11 and 17 years, the researchers looked at how the children were behaving in school and at home. Over time, a link became evident between malnourishment and antisocial or aggressive behavior, said Adrian Raine, a co-author of the study. Compared to those in the control group – the group that did not suffer from nutritional deficiencies – malnourished children showed a 41 percent increase in aggression at age 8 and a 51 percent increase in violent and antisocial behavior at age 17. While social class did not play a significant factor in behavior, intelligence level did, Raine said. “Poor nutrition, characterized by zinc, iron, vitamin B and protein deficiencies, leads to low IQ, which leads to later antisocial behavior,” he said. “These are all nutrients linked to brain development.” Researchers also found that the more indicators of malnutrition there were, the greater the antisocial behavior. “There’s more to antisocial behavior than nutrition, but we argue that it is an important missing link,” Raine said. “Biology is not destiny. We can change the biological disposition to antisocial and aggressive behavior.”

Mars-like Soils Can Harbor Life
U.S. Throws Away Half Its Food