You are here: Home › News › Stem Cells Develop Into Neurons In Living Animals
By Will Parker on December 1, 2000 in News 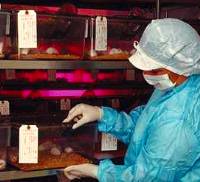 For years, researchers studying stem cells have been intrigued by the possibility that these cells might be used to treat brain diseases. Recent studies have suggested that neural stem cells transplanted into the brain can migrate throughout the brain and develop into other types of cells. Now, two new studies show that bone marrow cells transplanted into mice can migrate into the brain and develop into cells that appear to be neurons. The studies suggest that bone marrow may be a readily available source of neural cells with potential for treating such neurological disorders as Parkinson’s disease and traumatic brain injury.

These studies suggest that bone marrow, which is an easily available source of cells, could be used as a source of neurons to replace those damaged or lost in neurological disorders, the researchers say. It might also be possible to genetically engineer the cells in ways that would help them survive or work in beneficial ways. The fact that even bone marrow from adult mice generated neuronal cells shows an unexpected amount of flexibility in older cells and suggests that patients with brain disorders could be treated with their own cells, says Dr. Blau. Bone marrow cells taken from a patient’s own body would not be rejected by the body’s immune system.

While the results are very promising, researchers need to answer many remaining questions before marrow-derived neural cell therapies can be tested in humans. A key question is what growth factors and other signals prompt the bone marrow cells to develop into specific types of neurons. If researchers can describe how the normal process of cell differentiation works, they may be able to reproduce it in patients with disorders such as brain injury or Parkinson’s disease where neurons are not normally replaced. Researchers might also be able to discover factors that help cells enter the brain or connect with other cells. “We need much more data, but I think it’s a pretty encouraging start,” says Dr. Mezey.

Brain Can Rewire Itself On-The-Fly