You are here: Home › News › One-third of world’s fish catches being needlessly used as animal feed
By Will Parker on November 3, 2008 in News 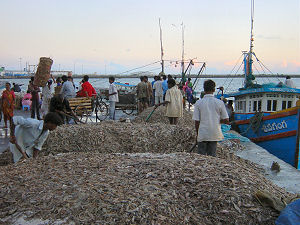 An alarming new study in the Annual Review of Environment and Resources contends that fully one-third of the world’s marine fish catches are ground up and fed to farm-raised fish, pigs, and poultry. The researchers involved say that this squandering of “forage fish” (anchovies, sardines, menhaden, and other small- to medium-sized fish) is rapidly worsening the already serious overfishing crisis in our oceans.

Researchers Jacqueline Alder and Daniel Pauly urge that other foods be used to feed farmed animals so that forage fish – which are highly nutritious and well-suited for direct human consumption – can be brought to market for larger-scale human consumption. “We need to stop using so many small ocean fish to feed farmed fish and other animals,” Alder said. “Society should demand that we stop wasting these fish on farmed fish, pigs, and poultry.” She added that although feeds derived from soy and other land-based crops are available, fishmeal and fish oil have skyrocketed in popularity because forage fish are easy to catch in large numbers, and hence, relatively inexpensive.

The study notes that forage fish account for a staggering 37 percent (31.5 million tonnes) of all fish taken from the world’s oceans each year, and 90 percent of that catch is processed into fishmeal and fish oil. In 2002, 46 percent of fishmeal and fish oil was used as feed for aquaculture (fish-farming), 24 percent for pig feed, and 22 percent for poultry feed. Pigs and poultry around the world consume more than double the seafood eaten by Japanese consumers and six times the amount consumed by the U.S. market.

Despite this large-scale extraction, few management plans have been created to guide the sustainable removal of these fish, and little is known about the role of forage fish in the marine ecosystem and how fishing impacts them. The most intensive commercial use of these fish is for farmed-animal feed but there is also a growing demand for human fish oil supplements. “We must find a better way to manage forage fisheries before we cause irreversible damage to the broader ocean environment which depends on them as a food source,” said co-researcher Joshua Reichert. “Whatever people take out of the sea needs to be carefully calibrated to ensure that sufficient fish are left to sustain populations of other fish, seabirds and marine mammals which all play a major role in the healthy functioning of the world’s oceans.”