You are here: Home › News › Metallic vapor behind noctilucent reflectivity?
By Will Parker on September 26, 2008 in News 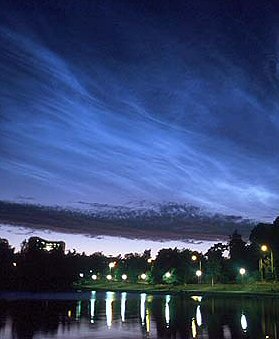 An explanation for the radar reflecting property of noctilucent clouds – the thin, wispy clouds that hover at the edge of space at 85 km altitude – has been proposed by a plasma physicist from the California Institute of Technology (Caltech), possibly laying to rest a decades-long mystery.

Noctilucent clouds, also known as night-shining clouds, were first described in 1885, two years after the massive eruption of Krakatoa sent up a plume of ash and debris up to 80 km into Earth’s atmosphere. The eruption affected global climate and weather for years and it also may have produced the first noctilucent clouds.

The effects of Krakatoa eventually faded, but the unusual electric blue clouds remain, nestled into a thin layer of Earth’s mesosphere. The clouds, which are visible during the deep twilight, are most often observed during the summer months at latitudes from 50 to 70 degrees north and south, although in recent years they have been seen as far south as Utah and Colorado. Noctilucent clouds are a summertime phenomenon as, paradoxically, the atmosphere at 85 km altitude is coldest in summer, promoting the formation of the ice grains that make up the clouds.

It was 25 years ago that researchers at Poker Flat, Alaska, first noticed that the clouds were highly reflective to radar. This unusual property has long puzzled scientists and Caltech’s Paul M. Bellan believes he may now have an explanation. He hypothesizes that the ice grains in noctilucent clouds are coated with a thin film of metal, made of sodium and iron; and the metal film causes radar waves to reflect off ripples in the cloud in a manner analogous to how X-rays reflect from a crystal lattice.

Bellan explained that sodium and iron atoms collect in the upper atmosphere after being blasted off incoming micrometeors. These metal atoms settle into a thin layer of vapor that sits just above the altitude at which noctilucent clouds occur (Interestingly, astronomers have recently have been using this sodium layer to create laser-illuminated artificial “guide stars” for adaptive optics telescopes that remove the distorting affects of atmospheric turbulence to produce clearer celestial images). Measurements of the density of sodium and iron atomic vapor layers show that the metal vapor is depleted by over 80 percent when noctilucent clouds are present.

“Noctilucent clouds have been shown to act very much like a flycatcher for sodium and iron atoms,” Bellan says. Indeed, in laboratory experiments, other researchers have found that at the frigid temperatures within noctilucent clouds, atoms in sodium vapor quickly become deposited on the surface of ice to form a metallic film. “If you have metal-coated ice grains in noctilucent clouds, the radar reflectivity can become enormous,” Bellan explains. “This reflectivity is not the sum of reflections from individual ice grains, which would not produce a very large reflection. Instead, what happens is that ripples in the cloud of metal-coated ice grains reflect in unison and reinforce each other, somewhat like an army marching in step across a bridge causes the bridge to vibrate.”