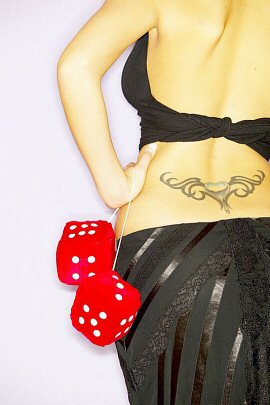 As if the possibility of contracting AIDS or hepatitis from a dirty needle wasn’t bad enough, two chemists have just completed a study that found carcinogenic chemicals are being used as tattoo pigments. Researchers Ronald Petruso and Jani Ingram presented their findings at an American Chemical Society meeting in Atlanta, urging for more regulation in the tattoo industry, particularly in light of the increasing popularity of body art.

“It’s not federally regulated and you don’t need a license in order to practice. But it should be because since these pigments are going under the skin, they’re being used as drugs,” Petruso said. “The number of people with tattoos is growing and still we don’t see much aired in the media about possible dangers outside of AIDS and hepatitis.”

Visiting several parlors, the researchers found lead in some tattoo pigments, but more worryingly was the discovery of carcinogenic substances in a common tattoo pigment.

Tracing the pigment back, the researchers identified the chemical plant where it was manufactured. “When we told [the manufacturer] about our findings they were very concerned because this is not what they design their products for. The pigments they make are used by auto manufactures for making paint,” Petruso said. “The real implication of this finding is that some tattoo pigments are being exchanged under the table. [The manufacturer] said that if they found out the source of who’s misusing their products, they would go after them and sue them.”

The real danger, according to the researchers, is that since tattoos are not federally regulated, no one even considers the possibility that these pigments might be dangerous. “There are so many tattoo parlors out there that you don’t have any idea where they’re buying their supplies. People come in knowing about hepatitis and AIDS, and tattoo artists are careful about ensuring that the needles are sterile. But they don’t expect to see [dangerous] chemicals present in those pigments, and that’s the situation that needs to be addressed,” Petruso concluded.