You are here: Home › News › Pimp My Electron Microscope
By Will Parker on November 28, 2005 in News 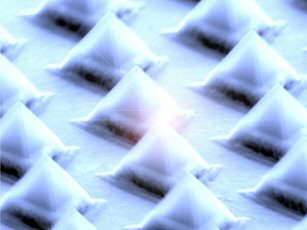 Exploring the properties and dynamics of materials at the nanoscale is problematic. Current techniques can deliver either good spatial resolution or an ultrafast time resolution, but not both. At least until now.

A new machine developed at Ecole Polytechnique Federale de Lausanne (EPFL) can deliver both time and special resolution so fine that the researchers can track the passage of an electron in a nanostructure. According to the developer, Professor Benoit Deveaud-Pledran, it can resolve at a time scale of ten picoseconds and a spatial resolution of 50 nanometers. Such resolution can reveal how electrons behave inside a single nano-object, writes Deveaud-Pledran in Nature.

The new rig is not particularly imposing and it doesn’t look expensive, although it took four years to perfect and cost more than a million Swiss francs. To build it, the EPFL researchers replaced the standard electron gun filament on an off-the-shelf electron microscope with a 20 nanometer-thick gold photocathode.

The gold is illuminated by an ultraviolet mode-locked laser, generating an electron beam that pulses 80 million times per second. Each pulse contains fewer than 10 electrons. As the electrons excite the sample, they cause it to emit light. This spectroscopic information is then collected and analyzed to recreate the surface morphology and to trace the path the electrons follow.

The researchers tested their new machine on 2-micron-high pyramidal quantum dots (pictured). When the electron beam impacts the pyramid, the electrons diffuse towards the closest nanostructure. The diffusion continues until the point of lowest energy is reached – the quantum dot at the tip of the pyramid.

As well as giving us a glimpse into nanoscale dynamics, the new gizmo will allow scientists to explore the properties of previously intractable semiconductor materials. “The wide energy range of the electrons in the beam can excite materials that won’t luminesce with laser techniques,” explained Deveaud-Pledran. “With a laser, you can’t get a short enough wavelength to excite diamond or silicon, for example. This machine will.”

“As far as the nanoworld is concerned, we still don’t understand the dynamics of materials at the nanoscale. I can’t tell you exactly what this machine will lead to because that depends on who uses it and what we find. But there’s no question that it will help us make progress, and that the potential applications are exciting,” Deveaud-Pledran concluded.