You are here: Home › News › Evolution Appears To Be A Start-Stop Affair
By Will Parker on June 17, 2005 in News 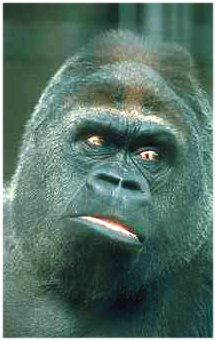 Some regions of the human genome have been hotspots for acquiring duplicated DNA sequences, but only at specific time-points during evolution. Researchers say that long periods of genomic stasis, in regard to the accretion of duplicated DNA fragments, are “punctuated” by relatively brief episodes of duplicative activity. The study, appearing in Genome Research, is the first where such temporal bias has been documented for DNA duplications, and it challenges the evolutionary paradigm of continuous alterations.

“Primate genomic sequence comparisons are becoming useful for elucidating the evolutionary history and organization of our own genome. Such studies are particularly informative within human pericentromeric regions – areas of rapid change in genomic structure,” said study leader Evan E. Eichler, from the University of Washington. Pericentromeric regions are sequences of DNA that lie in close proximity to the centromere, which plays a critical role in chromosomal separation during cell division. Pericentromeric regions contain an abundance of segmental duplications, which are large DNA sequences that exhibit strong similarity to the euchromatic ancestral loci from which they were copied. According to Eichler, the limited number of comparisons of pericentromeric regions among closely related primates suggests extraordinary dynamism, where duplication, deletion, and rearrangement of large segments of DNA occur on a huge scale.

The focus of the researchers was a 700-kilobase (Kb) pericentromeric region on the short arm of human chromosome 2. This chromosome has intrigued evolutionary and primate biologists for years because it appears to have formed from the fusion of two mid-sized ape chromosomes, and it is the primary cytogenetic distinction separating humans and their evolutionary progenitors. Within this 700 Kb region of human chromosome 2, the researchers identified segments of DNA that originated from 14 ancestral loci. These DNA segments, known as duplicons, ranged from 4-77 Kb in length and exhibited 94-99 percent sequence identity to their euchromatic predecessors. The researchers then performed a comparative analysis of these duplicons in other primate species, including chimpanzee, gorilla, orangutan, baboon, and macaque. This analysis revealed that the duplicative transposition events leading to the establishment of these duplicons within the pericentromeric region occurred during a relatively narrow window of evolutionary time between 10-20 million years ago. This corresponds to the time period following the divergence of humans and Old World monkeys, but before the divergence of humans and great apes. For the past 10 million years, however, no such “duplicative seeding” events appear to have occurred in this region of the genome. The scientists speculate that the molecular driving forces behind this “punctuated” duplicative activity may have been changes in transcriptional status or chromatin conformation.

“It is unclear why pericentromeric seeding events have occurred so frequently during this period of human/great-ape evolutionary history. It is also unclear as to why they suddenly cease, at least in the case of this pericentromeric region of chromosome 2,” said Eichler. “Other regions may show different temporal biases. The important implication here is that episodic bursts of activity challenge the concept of gradual clock-like changes during the course of genome evolution. Since duplications are important in the birth of new genes and large-scale chromosomal rearrangements, it may follow that these processes may have gone through similar episodes of activity followed by quiescence.”