You are here: Home › News › Mass Extinctions In Peru Due To Climate Change
By Will Parker on February 9, 2004 in News 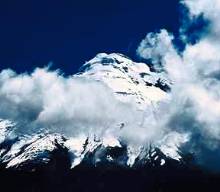 The new century may bring hundreds or even thousands of plant and animal extinctions to the Andes Mountains of Peru according to new research by Florida Institute of Technology Paleo-Ecologist Mark Bush. Bush’s findings, chronicled in the journal Science, result from the study of the first continuous record of Andean climate change during the past 48,000 years. The Andes region of Peru is one of the most biologically diverse areas on the planet.

“According to the International Panel on Climate Change, we can expect a minimum of one to two degrees Celsius increase in temperature in the Andes by the end of this century,” Bush said. “Our record shows that climate change of this kind has never happened in the past 48,000 years. It is not a natural phenomenon.”

One Third Of Amphibian Species May Disappear

Dark Ages May Have Been, Err, Dark
Comets May Spread Life From Earth Around Galaxy