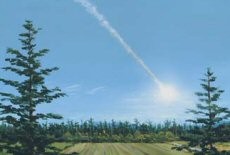 It's enough to give you a migraine, trying to reconcile all the possible factors that might contribute to climate change. But what if they're all inconsequential, and there's only a single event causing the warming trend? The 1908 Tunguska meteor's explosion over Siberia is what one Russian scientist believes could be behind current global temperature rises. His paper on the subject, which claims that climate change is not the result of man-made greenhouse gases at all, is currently being considered for publication in the journal Science First Hand (published by the Russian Academy of Sciences).

Detailing his theory, Vladimir Shaidurov, of the Russian Academy of Sciences, explains how changes in the amount of ice crystals at high altitude could damage the layer of clouds found in the mesosphere that influence the amount of solar radiation reaching the earth's surface. Vladimir posits that the Tunguska event early last century could have driven just such a process.

Current global warming models show that the rise in carbon dioxide emissions neatly coincides with the onset of the industrial revolution, but Shaidurov's own analysis of yearly mean temperature changes over 140 years indicate that there was actually a slight cooling in temperature up until the early twentieth century. Shaidurov believes that it was not the industrial revolution that caused the rise in temperature, but the catastrophe known as the Tunguska event, or Tungus meteorite. 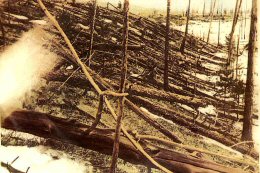 The Tunguska event was a large meteor or asteroid that entered Earth's atmosphere and exploded 8 km above the Tunguska River in Siberia. The cataclysm was calculated to have released energy equivalent to that of a 15 megaton nuclear explosion. It felled 60 million trees over an area covering 2000 square kilometers. There wasn't much in the way of any formal analysis done on the atmospheric effects of the explosion, presumably because it occurred in a remote part of Siberia in 1908. Despite this, crucial to Shaidurov's theory is his claim that the explosion would have caused: "considerable stirring of the high layers of atmosphere and changes in its structure," which he says could have been the catalyst for the rise in global temperatures.

Shaidurov's theory is supported by other studies on Earth impacts and celestial debris that is scattered about at high altitude. Scientists from the Australian Antarctic Division, the University of Western Ontario, Aerospace Corporation, Sandia and Los Alamos national laboratories have already laid their cards on the table and declared in a paper published in Nature that dust from asteroids entering the Earth's atmosphere has a bigger effect on weather than once thought. "Our observations suggest that [meteors exploding] in Earth's atmosphere could play a more important role in climate than previously recognized," the researchers write. These research teams urge that climate modelers should take such events into serious consideration, because dust from asteroids, meteors and the like regularly find their way into high altitude cloud. On one research field trip, Dee Pack, of Aerospace Corporation, watched as an: "asteroid deposited 1,000 metric tons in the stratosphere in a few seconds, a sizable perturbation," adding that meter-sized asteroids hit Earth 50-60 times every year. They suggest that asteroid dust could be modeled as the: "equivalent of volcanic eruptions of dust, with atmospheric deposition from above rather than below." This new information on micron-sized particles might "have much greater implications for extraterrestrial visitors like Tunguska," explains Peter Brown at the University of Western Ontario.

Shaidurov explains that these disturbances can alter the delicate bands of clouds that regulate the amount of solar energy entering the Earth's atmosphere. Shaidurov says that it doesn't take much of a change in atmospheric levels of water - in the form of vapor and ice crystals - before it contributes to a significant change in the Earth's surface temperature. He also notes that the most potent greenhouse contributor is water, arguing that a variance in water levels has a far greater effect on temperatures than the greenhouse gases usually blamed for global warming. A rise in water vapor of just 1 percent can raise the global average temperature of Earth's surface more then 4 degrees Celsius.

It was Irish scientist John Tyndall who discovered the importance of water in regard to the Earth's climate 150 years ago, when he stated: "The strongest radiant heat absorber, is the most important gas controlling Earth's temperature. Without water vapor the Earth's surface would be held fast in the iron grip of frost." Tyndall's discovery shows that the system whereby heat reaches the Earth's surface and is then radiated back through a thin band of high altitude cloud is a delicate one.

Further supporting Shaidurov's hypothesis, Andrew E. Dessler of the Texas A & M University, writing in The Science and Politics of Global Climate Change, claims that: "Human activities do not control all greenhouse gases, as the most powerful greenhouse gas in the atmosphere is water vapor. Human activities have little direct control over its atmospheric abundance, which is controlled instead by the worldwide balance between evaporation from the oceans and precipitation."

Shaidurov believes that only something as destructive as the Tunguska event could have disturbed high altitude atmospheric water levels and destroyed noctilucent clouds in the mesosphere. The event also happens to coincide with the period when warming began rising steadily during the twentieth century. 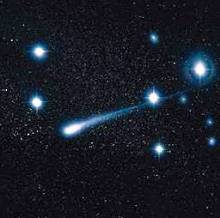 With people becoming increasingly aware of the damage a massive Earth-bound asteroid could cause, Shaidurov's theory demonstrates how Earth impacts can have varying degrees of effect other than the impact itself; but with results just as devastating. Is it feasible, then, to argue that many of the significant climate fluctuations observed throughout Earth's history have been caused by asteroids, meteorites or comets entering the Earth's atmosphere or impacting the Earth? One of the most cogent explanations for the rise and fall of great civilizations is by Jared Diamond, who argues that a civilization eventually reaches a critical point where it declines and collapses as it extends itself beyond a sustainable level. But is it equally plausible that the resources these civilizations relied upon disappeared through significant climate change caused by the fallout of an Earth impact?

The Earth impact theory is a convenient way to explain why the simultaneous collapse of a number of powerful civilizations during the Bronze Age, for example, also coincided with the rise of cultures and societies elsewhere. In the past this was attributed to such things as war, famine and natural disasters, until researchers started bandying about ideas of Earth impacts being responsible for all of the above. One thing's for certain, an impact on a large enough scale could knock ecological systems around a lot, perhaps even enough to alter the balance of power and give rise to a whole new cultural dominance. This is nothing new, as there are numerous examples of major climate fluctuations throughout history, with some of them being significant enough to plausibly displace or wipeout once prosperous societies. Farming areas scattered about the Sahara and the Dead Sea eventually became deserts around 2350BC, as the terrible growth conditions reflected in tree rings show, while sediment samples taken from the rivers and lakes of Europe and Africa show a ruinous drop in water levels during the same period. These observations are not unlike the predicted changes that could occur in the near future. The latest scientific estimates predict, for example, that during this century and the next, rainforests will disappear, fertility in some regions will drop dramatically, sea levels will rise and some areas in cooler climes will be as hot as today's deserts.

So, are extraterrestrial bodies the cause of climate fluctuations on Earth, and if so, will we see an end to the current rise in temperatures as the effects of the Tunguska event recede; or are some of our cultures destined to suffer the same fate as civilizations before us?

Shaidurov doesn't try to predict when the effects of the Tunguska catastrophe might abate, or even if levels will ever return to pre-Tunguska normalcy. The interesting thing to note here, if Shaidurov's theory proves correct, is that if current and past climate changes can be attributed to single isolated events; do our current scientific projections for a worsening of global warming really add up?