The Slacker's Guide To Serendipitous Research 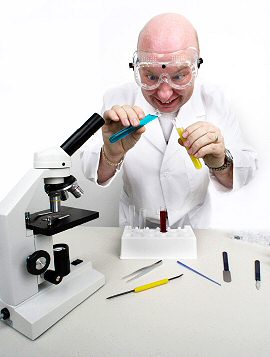 New wonder drugs aren't always the result of late-nights spent analyzing chemical reactions in the lab. Rather, researchers often stumble on to new pharmaceuticals, chemical compounds or inventions by accident. Scientists may not like to admit it, but serendipity has played a big role in many modern wonder drugs and gee-whiz inventions. So, if you're a young researcher looking to become a zillionaire, what's the best way of getting serendipity working for you? As a helpful guide, we've listed five choice tips which should put you on the road to riches.

Untidiness and clumsiness could well be beneficial attributes to look for in research staff. The artificial silk known as rayon was discovered thanks to a hapless lab assistant spilling a bottle of collodion and finding that thin strands could then be drawn from the liquid.

Likewise, an accidental spillage at a 3M laboratory led chemist Patsy Sherman to discover the fabric treatment Scotchgard. The synthetic latex mixture spilt onto a lab assistant's canvas tennis shoe and as well as sticking fast, the researchers noticed that the shoe became resistant to soiling. Sherman recognized the commercial applications immediately.

But science's biggest slob must be Alexander Fleming, who was notorious for having the messiest laboratory at London's St.Mary's Hospital. But the chaotic state of his surroundings didn't bother Fleming in the least and in 1928 he took off on holiday leaving his lab in a particularly squalid state. Upon his return, he noticed that a number of staphylococcus cultures he'd left out had mould growing in them. Upon closer examination, he noticed that the mould had inhibited the bacterial growth in some of the dishes. He investigated what was retarding the bacteria and managed to isolate an extract from the penicillium family of moulds which, of course, became known as penicillin.

More recently, the artificial sweetener aspartame (marketed as Equal and Nutrasweet) was discovered by chemist James M. Schlatter while he was trying to develop a drug for treating ulcers. He noticed aspartame's sweet taste when by chance he licked his finger which had been in contact with some spilt aspartame. Schlatter immediately twigged to aspartame's potential as a calorie-free sweetener, although the FDA's concerns about its possible links to cancer kept it from widespread use for several years.

It doesn't matter how non-sexual your research may appear to be, there's always a chance that it'll have a sexual angle that's not immediately apparent. So, when carrying out human trials with potential new therapeutic drugs, be on the alert for unintended effects that may be occurring "south of the border."

Viagra was originally intended to treat angina, but instead, now earns billions as an erectile dysfunction treatment thanks to the sharp eyes of Pfizer researcher Ian Osterloh. Ironically, Viagra is now being found to have all sorts of other non-sexual therapeutic effects. These include boosting the cardiovascular system, minimizing damage to the heart after heart-attack, treating the inflammatory disorder Crohn's disease, increasing the immune system's response to cancer and assisting in stroke recovery.

Hormonal contraceptives and female contraception were far from researcher Carl Djerassi's mind when he helped develop norethindrone, a synthetic form of progesterone, in the 1950s. In fact, no one had a clue what to do with the new synthetic hormone, and it was largely ignored. Eventually, however, its ability to powerfully disrupt ovulation was recognized, and, more importantly, it was found to be effective when taken orally. Animal contraception was the initial application, but it didn't take pharmaceutical companies long to develop what we now call The Pill. "Not in our wildest dreams did we imagine it," mused Djerassi in later years. The Pill is a good example of how a novel discovery doesn't always immediately have a big impact.�It was only after several years of scientific abstraction that the significance of the discovery was fully understood.� As Louis Pasteur said; "chance favors only the prepared mind."

Science is often preoccupied with making things bigger, faster or stronger, but it might pay better dividends to instead be on the look out for results that indicate weaker, smaller or slower. Consider Spencer Silver, a chemist at 3M who was trying to develop a new range of super-strong adhesives. Instead, he concocted an adhesive that was astonishingly weak. The sub-standard sticky languished for 10 years until another 3M staffer noticed that the adhesive might have an application in re-usable bookmarks. Some prototypes were produced, consumer testing was undertaken and the Post-it note was born in 1977.

Never Forget How Vain People Are...

Never underestimate our desire to look good. Several therapeutic drugs have come out of the left-field as novel treatments for age-related conditions. The baldness drug Minoxidil (marketed as Rogaine) was first developed to treat high blood pressure. But when balding male subjects in a clinical trial starting sprouting new hair, the researchers changed tack and produced a topical treatment for baldness and hair loss. And tretinoin (marketed as Retin A), an acne treatment with a long list of side-effects, is now primarily known for its smoothing effect on wrinkles. And don't forget, cosmetic effects don't have to be pronounced to get consumers excited!

Get Out Of The Lab Occasionally...

Getting some fresh air worked for Isaac Newton, who came up with his theory of gravitation while lazing around under an apple tree. And the great outdoors have helped inspire other scientists as well. We wouldn't have Velcro if it wasn't for engineer Georges de Mestral taking his dog for a walk and becoming intrigued by the Burdock (Arctium lappa)) seeds that stuck to his dog's coat. Examining the seeds more closely, he saw the possibility of using hooks and loops to bind two surfaces reversibly in a simple fashion. He subsequently developed the hook and loop fastener and patented Velcro in 1951.

Dog-walking also figures in another serendipitous discovery, when an Italian chemist watched his dog have a fit after catching a toad. Examining the toad later, he found a huge range of biologically active chemicals in its venom - including some previously unknown antibiotics.

And finally, it might help to get into the habit of seeing dollar signs when your experiments produce anomalous results. As Isaac Asimov said; "The most exciting phrase to hear in science, the one that heralds new discoveries, is not 'Eureka!', but 'That's funny�'."