Renewables Provide A Ray Of Sunshine In Energy Debate 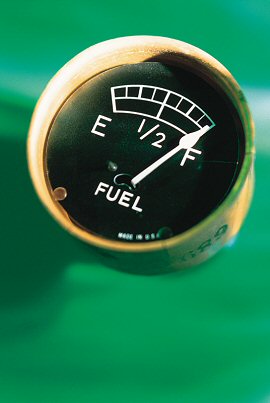 As arguments about climate change rage, it's becoming increasingly common for policy makers to tout "clean" nuclear energy as the only viable alternative to fossil fuels. Going nuclear, they say, is our best option for replacing fossil fuels. But this is ignoring the fact that important inroads are being made with renewable energy sources such as solar power. The question is: within the context of limiting greenhouse gas emissions, are alternative energies emerging fast enough to be considered a viable alternative to nuclear energy?

It's generally agreed that most of our energy use in the future will center around electricity - whether for homes and businesses, portable devices or transportation - which is something that nuclear reactors are very good at producing. This in itself may be reason enough for nuclear contractors to rub their hands with glee, as countries looking to meet greenhouse gas emission targets rush for their services. At least, this may have been the case a decade or so ago, but today's energy market has become a lot more fluid and unpredictable.

Renewable energy sources - such as solar, biofuels, wind, and hydro - that once seemed laughably inadequate as an alternative to fossil fuels are becoming cheaper and more efficient in their own right. More so in a climate where fossil fuels are becoming increasingly expensive, and are likely to continue doing so with the introduction of carbon taxes. True, alternative energies may not have arrived as a viable alternative just yet. For starters, they are subject to the vagaries of nature, while nuclear reactors are not. Critics argue, for example, that a wind turbine farm can only operate at a "capacity factor" (a ratio that measures the potential output of an energy source against its actual output) of 30 to 35 percent, while a nuclear reactor operates at around 90 percent. But these criticisms in turn have to be weighed up against the potential hazards of nuclear waste disposal and nuclear meltdown (which are admittedly rare, but devastating nonetheless).

Despite the criticisms leveled against renewable energies, recent case studies and research show that they are well on the way to becoming viable within the next decade; solar energy particularly so.

At the 235th national meeting of the American Chemical Society in New Orleans last week, Harry Gray, a principal investigator at the Caltech Center for Sustainable Energy Research (CCSER), explained that it is possible for the world to replace fossil fuels with energy derived from photovoltaic (PV) technologies (technologies that convert light to electricity). Gray stated that the energy from sunlight hitting the Earth in one hour alone is equal to all of the energy used on the planet in one year, and that "Solar can potentially provide all the electricity and fuel we need to power the planet."

But one of the biggest hurdles in making the photovoltaic dream come true is the cost. Comparatively, fossil fuels are still dramatically cheaper than solar-based energies, with photovoltaic energy costing anything from 35-to-50 cents per kilowatt-hour, compared with coal and natural gas at 5-to-6 cents per kilowatt-hour. But Gray, the Arnold O. Beckman Professor of Chemistry at the California Institute of Technology, is optimistic that this will change in a decade or so. Why? He believes people are in favor of cleaner, renewable energies, and because of this renewables don't have to match or beat fossil fuel prices. Once photovoltaic energies get down to levels of around 10 cents, says Gray, "large numbers of consumers will start to buy in, driving the per-kilowatt price down even further. I believe we are ten years away from photovoltaics being competitive with more traditional forms of energy."

All energy-producing initiatives produce waste and are subject to potential inefficiencies of some description, and solar is no different in this respect. The challenges associated with photovoltaics, explains Gray, include using non-toxic manufacturing processes and materials that will create efficient, long-lasting solar cells. In addition to these criteria, chemists must ultimately develop clean fuels derived from these technologies, or the whole exercise is pointless. "The Holy Grail of solar research is to use sunlight efficiently and directly to 'split' water into its elemental constituents - hydrogen and oxygen - and then use the hydrogen as a clean fuel," said Gray. "The pressure is on chemists to make hydrogen from something other than natural gas or coal. We've got to start making it from sunlight and water."

If Gray's estimate that photovoltaics will be viable in ten years is correct, then that raises questions with regard to nuclear reactor planning and construction. In response to former Australian Prime Minister John Howard's ambition to construct nuclear reactors in undisclosed locations in Australia, several commentators pointed out some interesting specifics about the most recent reactors constructed around the world. Critics noted that the last nuclear power generator to be built in the United States was the Watts Unit Bar 1 reactor, which began construction in 1973, and finished in 1996 - 23 years.

Reactor construction in Canada has been beset with similar problems. Darlington Nuclear Generating Station took around 12 years to construct, and had a budget blowout of 250 percent. In the United Kingdom, too, Suffolk's Sizewell B nuclear facility, the most technologically advanced yet built, took 15 years to complete and had a budget blowout of around 35 percent. Add to this the fact that an increase in nuclear reactors will lead to a depletion of uranium stocks within a century - unless you factor in "breeder reactors" that have so far been shunned as they can produce weapons-grade nuclear materials - and nuclear ambitions start to look decidedly shaky.

But it's not just technologies that produce energy that are important; there is also a growing interest in materials that make the usage, storage, and transmission of renewable energies more efficient and cost effective. At the American Chemical Society meeting in New Orleans, keynote speaker Raymond L. Orbach, the Under Secretary for Science at the U.S. Department of Energy, said that "Our whole present-day pattern of energy production and use goes back to two key inventions in the 1870s: the incandescent light bulb and the internal combustion engine." To overcome the inherent inefficiencies of these now archaic technologies and their accompanying mindset, Orbach remarked that "transformational breakthroughs" were now needed. Orbach's call for new approaches in how we produce, utilize, and perceive energy seem to be inspired by promising advances in nanotechnology, and other materials based science.

Lately there have been a number of material science breakthroughs that look set to redefine everyday technologies in regard to energy efficiency and convenience. Northwestern University researchers recently used metallic nanotubes to make flexible, semi-transparent, highly conductive films that can be used for devices such as flat-panel displays and solar cells. "High purity carbon nanotube thin films not only have the potential to make inroads into current applications but also accelerate the development of emerging technologies such as organic light-emitting diodes and organic photovoltaic devices. These energy-efficient and alternative energy technologies are expected to be of increasing importance in the foreseeable future," said Mark Hersam, Northwestern's professor of materials science.

Another fascinating development in solar cell technology comes from Queensland University, Australia, where professor John Bell is developing transparent solar cells that act as both window and energy generator in either a domestic or commercial setting. "The transparent solar cells have a faint reddish hue but are completely see-through. The solar cells contain titanium dioxide coated in a dye that increases light absorption," explains Professor Bell. "The glass captures solar energy which can be used to power the house but can also reduce overheating of the house, reducing the need for cooling." Bell explains that an entire house could be built from the cells, and that buildings using the cells may even produce enough electricity to be sold back to the grid.

Assuming that the current, gloomy climate models are correct, we only have a relatively small window of opportunity to change how we produce, manage, and use energy. It would be disingenuous to suggest that we have to choose this or that particular energy initiative and stick with it for good or ill. Given the time frame, it's more likely that we'll be using a combination of different energy sources until we can wean ourselves off fossil fuels completely. But having said this, renewable energy sources must remain the priority as nations consider where they're going to invest their energy research dollars in the long-term.