Leaving The Body Behind 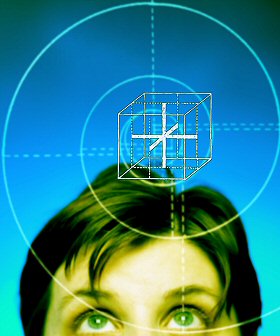 Our earlier piece regarding Princeton University's longtime dabbling in the paranormal showed how science and the paranormal (spooky stuff) are incompatible bedfellows. But this is not to say that science - like it has a myriad number of times prior - cannot strip an otherwise inexplicable phenomenon of its paranormal status.

The latest bit of paranormal noodling getting a reality check is the mystical out-of-body experience, or OBE. A collaborative team of scientists and philosophers reports progress toward understanding what happens when someone experiences an OBE, or feelings of disembodiment. What's more, this team of hokum-busters has suggested some practical ways in which the physiological mechanisms driving OBEs can be used beneficially. On a much more fundamental and profound level, the team also believes that solving the mystery of OBEs will reveal where we derive our sense of self.

There's all sorts of far-fetched ideas regarding OBEs: meeting up with fellow disembodied souls on astral planes; visiting dead relatives; or even looking into the future. But aside from the claims made by spiritualists regarding OBEs, many people who have suffered severe trauma (like a car accident or stroke) also experience feelings of disembodiment. But just what is occurring inside the brain during these bouts of mental meanderings has baffled scientists and philosophers - until now.

Roughly 10 percent of people will report an OBE at some point in their lives. But this relatively high frequency hasn't really helped in explaining these freakish and disturbing experiences. Now, neuroscientist Dr. Henrik Ehrsson, from the University College London, seems to have devised an array of experiments that induces at least some aspects of an OBE in healthy participants. This is important, because if OBEs can be induced under controlled conditions, then researchers may be able to clear up some of the mysticism surrounding them. "Out-of-body experiences have fascinated mankind for millennia," says Ehrsson. "Their existence has raised fundamental questions about the relationship between human consciousness and the body, and has been much discussed in theology, philosophy and psychology."

Ehrsson's motivation stems from the weighty question of where we derive our sense of self. "I'm interested in why we feel that our selves are inside our bodies - why we have an 'in-body experience,' if you like," says Ehrsson. But according to Ehrsson, tackling this age-old problem experimentally has always been difficult. Just how is it possible to measure something as ineffable as consciousness, or our sense of "self"?

Rather than pulling out a Ouija board, Ehrsson opts to use new technologies to induce OBEs in his test subjects. Ehrsson's experiment requires that participants sit in a chair wearing a virtual reality (VR) headset - where two live streams of video footage of the participant's own back are fed into each eye to create a 3-D picture. The two video cameras placed behind the subject mean that the subject ends up viewing their own back just as they would if they were sitting behind another person. This is quite unlike other VR applications. "It is different from any virtual reality set-up because it examines what happens when you look at yourself," says Ehrsson.

Next comes multisensory information that triggers the illusion; an experimenter stands to the side of the subject's POV, and uses two plastic rods to simultaneously touch the subject's real and virtual chest. And lo and behold, the subjects did indeed report that they had the sensation of being seated behind themselves during the illusion. "This was a bizarre, fascinating experience for the participants - it felt absolutely real for them and was not scary," says Ehrsson. "Many of them giggled and said 'Wow, this is so weird!'"

Ehrsson considers the experiment somewhat of a triumph, and envisions that this elementary experiment will soon open doors regarding consciousness, our sense of self, and the elusive "I". "The invention of this illusion is important because it reveals the basic mechanism that produces the feeling of being inside the physical body," explains Ehrsson. "This represents a significant advance because the experience of one's own body as the center of awareness is a fundamental aspect of self-consciousness."

Through another experiment involving a hammer and the subject's tender, squishy bits (ergh), Ehrsson demonstrated that we perceive our bodily center to be wherever our eyes are located. During this second experiment, the subjects had to watch as a hammer struck an unseen region of their virtual body positioned just below, and outside the view of the camera. Measuring the subjects skin conductance, Ehrsson was able to identify responses such as fear, which revealed that the subjects sense of "self" had left their physical body, and shifted to the virtual one. "This experiment suggests that the first-person visual perspective is critically important for the in-body experience. In other words, we feel that our self is located where the eyes are," Ehrsson said.

Of additional interest was the fact that when subjects were blindfolded straight after the VR experiment, and asked to move to their original position, the subjects instead gravitated toward where their virtual body had been situated. But when an inanimate object was filmed in place of the subject during the VR experiment (so that the subject saw a chair, or block as themselves) they could quite easily return to where their physical body had been. Colleague Olaf Blanke, from the Ecole Polytechique Fédérale de Lausanne (EPFL), explains that there may also be some cognitive involvement at play, which allows us to distinguish ourselves form other objects. "Full-body consciousness seems to require not just the 'bottom up' process of correlating sensory information but also the 'top down' knowledge about human bodies," says Blanke.

Ehrsson concluded that there probably wasn't really much in the spiritual notion of OBEs, and that they could instead be attributed to what he describes as "multisensory conflict." He claims that there are so many somatic sensory signals involved with in-body-experience (our sense of awareness, or "self") that a short circuit or cross wiring of any of these could result in an OBE. "Brain dysfunctions that interfere with interpreting sensory signals may be responsible for some clinical cases of out-of-body experiences," says Ehrsson. "Though, whether all out-of-body experiences arise from the same causes is still an open question."

There are other uses for OBEs, according to Ehrsson. He says that many industries could benefit from exploiting the inherent quirks of induced OBEs. One example that Ehrsson provides is to project an individual's awareness into a virtual body so that they can be trained in "teleoperating" tasks, such as complex surgeries. But most of all, Ehrsson believes that continued work in this area will eventually relieve the stigma associated with these bizarre disembodiments, and perhaps clear up the mystery surrounding alleged paranormal activity. "There has been no way of inducing an OBE in healthy people before, apart from unsubstantiated reports in occult literature," says Ehrsson. "It's a very exciting development, and has implications for a range of disciplines from neuroscience to theology."

Related articles"
Normalizing The Paranormal
Déjà Vu Research Is Outta Sight
Is Subconscious Perception the Root of All Evil?
A Penny for Your Qualia
Retina Adapts By Suppressing The Commonplace