Yes, We Have No Bananas 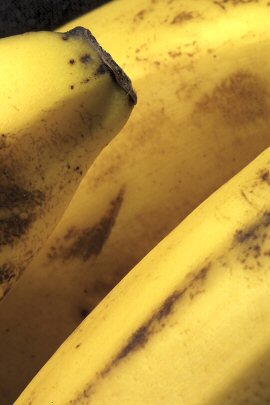 As certain species' gene pools shrink, it seems that global staples like maize and bananas are under a very real threat of extinction. Their potential demise can be attributed to land clearing and/or the problems associated with genetic material stockpiled by governments and private institutions. Exacerbating the problem even further is the commercial demand and overexploitation of particular species of banana that will inevitably lead to loss of species. Now, agricultural and biotech experts are arguing that better systems aimed at ensuring genetic diversity among these crucial crops needs to be implemented - before it's too late.

The banana is the most exported fruit in the world, and the fourth most important crop behind rice, wheat and maize. According to the United Nation's Food and Agriculture Organization (FAO), India is the world's biggest banana grower, producing 16.8 million tonnes, or 20 percent of global output, of bananas annually (that's a whole lot of banana splits). Interestingly, nearly all of the bananas bound for the world market, and your local supermarket shelves, are of the Cavendish variety, leaving the banana market in a precarious eggs-in-one-basket situation. There have been warnings of banana crop extinctions coming from various sources for a number of years now, but the most recent one from the FAO says that unless extra care is taken in maintaining species diversity, it will be impossible to prevent extinctions.

The FAO warns that increased deforestation and urbanization is having a devastating impact on India's wild banana stocks that have existed for thousands of years. The significance of this is that within these forests exist the Cavendish banana's ancestors, which represent a rich gene source important to banana crops worldwide. "The Indian subcontinent has made an enormous contribution to the global genetic base of bananas," says FAO Agricultural Officer NeBambi Lutaladio. Gene diversity is vitally important to any species, but even more so to species that already have a very limited gene base, which is being limited even further through deforestation. If this continues unchecked, says Lutaladio, it "could cause serious problems because bananas, particularly commercial varieties, have a narrow genetic pool and are highly vulnerable to pests and diseases."

If you believe that these are merely the scare tactics of wild-eyed, fundamentalist greenies, think again. The Cavendish began its current reign on the commercial market when the Gros Michel banana split the scene after an outbreak of Panama disease during the 1950s. So there is already at least one documented case of species demise that should make us sit-up and take special note of the warning from the FAO. In 2003, Panama disease made headlines again when it began attacking Cavendish bananas in some Asian countries. Back then, FAO spokesman Eric Kueneman, Chief of Crop and Grassland Service, said: "What is happening is the inevitable consequence of growing one genotype on a large scale." The message seems to be "diversify or die," but has this message come too late to save the Cavendish?

One of the biggest disease concerns currently is black Sigatoka fungus that has destroyed plantations in various regions, including the Amazon. Experts say that in light of black Sigatoka, commercial markets should probably begin thinking about a new variety of banana for export, as there is now only one cloned banana variety (Musa Acuminata spp Burmannicoides) left that has genetic resistance to the disease. Mr Lutaladio explains that smaller farms exist globally where banana crops are grown that are not susceptible to the diseases currently hurting the commercial Cavendish bananas. To this end, Lutaladio is emphasizing the contributions of local populations, and continued research on how to use wild bananas effectively in breeding programs as a way forward in maintaining species diversity.

Mr Lutaladio's suggestions show how global cooperation, local knowledge and the protection and research of landrace crops (wild, native or adapted species), are vital measures when it comes to maintaining healthy species diversity. But over the years, governments and private institutions have chosen to "bank" seeds in centralized locations - often far away from their wild habitats - in order to ensure the preservation of diverse species. The advantages to such a practice seem sound on the face of it, as it allows convenient access to seeds for biotech research and insurance that there will always be a bountiful supply of primary crop seeds. Sounds good, but gene banks do run into trouble every now and then.

The International Maize and Wheat Improvement Center (CIMMYT) is one such gene bank, where Suketoshi Taba, head of CIMMYT, has constant nightmares about all the possible ways in which the center's seeds could die. Taba and his team have to constantly monitor the thousands of seeds in their possession, making sure that each one is kept at the right temperature and humidity. Germination of seeds is also a painstaking process, and maize is said to be under crisis due to the fact that many of the seeds are not germinating - they're either dead or sterile. Taba explains that another danger is the risk of gradual genetic drift. This may come as somewhat of a surprise, as one would assume conditions and isolation to be ideal in a lab. "For maize regeneration, we use artificial pollination, to avoid out-crossing with pollen from other maize fields," explains Taba. "But even the individuals in a maize population or accession are genetically diverse. How can we decide on the best way to pollinate the plants, or how many ears we need to harvest, or how many and which seeds to choose from each ear?" says Taba.

Overall, however, Taba stresses the importance of seed banks in maintaining species diversity, and rescuing landraces and adapted germplasm identified as being endangered. He does question with a sense of irony, however, why, when the capacity for discovering new ways to combat crop pathogens, funding should also be so low. But at a recent meeting attended by the keepers of worldwide maize germplasm collections, it was agreed that the task at hand is bigger than any one organization. Researchers at CIMMYT admit that it is difficult for them and other large gene banks to: "regenerate varieties that originated in tropical or highland areas, a role better played by national gene banks," adding that: "national banks can more efficiently collect new seed and distribute seed from collections to local plant breeders and biologists." But they also warn that there is a lot of red tape to be overcome before such a system can be successfully implemented, such as: "plant ownership rights, nationalism, phytosanitary regulations, and a tower of database babble that hampers effective documentation and use of collections."

In spite of a possible crisis in bananas or other crops, there doesn't seem to be much concern shown outside of the labs of biotechnology firms and gene banks. Perhaps crops just aren't as sexy as avian flu pandemics or rogue asteroids smashing into Earth. Regardless of why crops just aren't that newsworthy, the threat of our staple foods gradually disappearing is in fact very serious. As Jared Diamond will tell you in his book Collapse, whole civilizations can disappear virtually overnight. Perhaps our civilization's demise will be one we never anticipated, such as a staple crop crisis associated with commercial pressures for single varieties of a particular crop. One way to curb this would be to place more emphasis on local produce and varieties, but in a global market of generic products this seems unlikely.