The Dummies Guide To Mind Reading 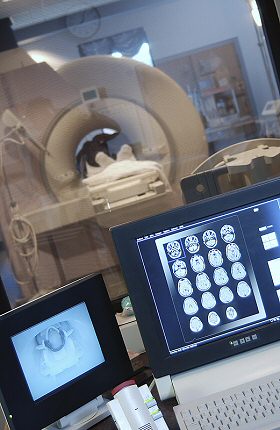 What would a world where we could read each other's thoughts be like? Frightening? Peaceful? Boring? Would we become like a colony of worker ants? At present, perhaps thankfully, this question remains in the realm of philosophical musings, but, believe it or not, science is beginning to make some progress in the head-tapping department.

Using functional magnetic resonance imaging (fMRI) and some complex algorithms, researchers say that they have been able to identify how and where the brain stores our "intentions," or our planned decisions. While this is remarkable in itself, researchers have been able to use this knowledge to convincingly forecast a subject's intentions when faced with the choice of two tasks. If our minds turn out to be this deterministic at much more complex levels, then the thought police could soon be on their way.

Once upon a time, the brain was a closed shop, and so too our thoughts, but that was before the advent of fMRI and PET scans. Now, these devices enable scientists to get a good look at the brain and discover which regions are most likely responsible for our thoughts and actions. Rather than directly identifying actual neural activity as you might expect, fMRI works by measuring changes in cerebral blood flow (CBF) and blood oxygenation levels (together known as hemodynamic, or literally blood-dynamic, responses) that occur as a consequence of neural activity.

This association between neural activity and blood flow is not a new one, with the idea first being conceived around 100 years ago. Basically, when nerve cells are active they consume the oxygen carried by red blood cells, which means that an increase in blood flow will be detected where there is increased neural activity, after a delay of roughly 1-5 seconds. It was this concept and the latest fMRI technology that allowed Professor John-Dylan Haynes, from the Max Planck Institute for Human Cognitive and Brain Sciences, to "read" subjects' intentions based on their neural activity.

During Haynes experiment, subjects were told to choose freely between two future actions - to either subtract, or add, two numbers - and to then hold this intention for a moment until they were presented with two unknown numbers on a screen. Remarkably, prior to having seen the numbers, the researchers were able to identify the subject's intentions with 70 percent accuracy by imaging patterns of activity in the brain's prefrontal cortex. Of course, the numbers were eventually splashed onto the screen to confirm that an intention specific to the task had in fact been identified, rather than some other intention. "It had been previously assumed that freely selected plans might be stored in the middle regions of the prefrontal cortex, whereas plans following external instructions could be stored on the surface of the brain. We were able to confirm this theory in our experiments," said Haynes.

A critical aspect of Haynes' work was the introduction of new computer software to recognize typical activation patterns in the brain associated with specific thoughts, called "multivariate pattern recognition". Haynes says that once the computer has been adequately "trained" to make these connections, it can predict the intentions of subjects solely on brain activity. During the course of "reading" people's minds, Professor Haynes says that his experiments have also revealed some intriguing insights regarding brain function. "The experiments show that intentions are not encoded in single neurons but in a whole spatial pattern of brain activity," says Haynes. "Intentions for future actions that are encoded in one part of the brain need to be copied to a different region to be executed."

So, do we now have to accede to the fact that our most intimate thoughts will one day be available to others? Well, don't retreat to the safety of your tin-foil hat just yet, as there is healthy skepticism regarding Haynes' research.

One criticism concerns something called "hemodynamic lag", which refers to the 1-5 second period between neural activity and the blood flow that the fMRI identifies. If this were unaccounted for it would certainly produce some bogus results. But in this case the criticisms seem unfounded. "Our data analysis takes this known hemodynamic lag into account, as one would expect from a good study," says Haynes. Fair enough, but what about the concerns raised by some fMRI researchers regarding vascular differences in subjects; wouldn't that affect the results? Aren't all our brain physiologies just far too different for a universal thought reading device to be useful? Well, the answer to that, too, seems to be no.

In a separate study conducted at the Max Planck Institute for Dynamics and Self-Organization, researchers have used mathematical models to show that while our brains may be wired differently, a comparable pattern of neural activity and function can be observed between two brains when exposed to similar sensory input. Which may not seem like a big deal; after all, arriving at the same idea or solution as a colleague isn't a rare occurrence. But when you consider the sheer number of neurons and networks involved in the process, there would seem to be little chance for us to come up with the same answer at all. Even in a "network of 1,000 neurons, where each neuron can be connected to any other, there are a million possible contacts between any two neurons and consequently an unimaginably large number of possible networks," say researchers Raoul-Martin Memmesheimer and Marc Timme. "Each combination can have either an inhibiting or an activating effect on the downstream neuron and, in addition to this, can differ in its intensity and reaction time."

The Memmesheimer and Timme research seems to show that evolution has maintained some predefined neural networks for us to use when problem-solving. If correct, this would imply that any criticism leveled at Haynes' work based on the idea that we all think differently because our brains are wired differently is not a very strong criticism at all.

So, if mind "reading" were possible, what would the possible applications be? One positive application would be in the field of bionics, where paralyzed patients have already been hooked-up to computer-assisted prosthetic devices as well as what have tentatively been labeled "brain computer interfaces". Connected to these computers, patients can operate devices like televisions and PCs because the computer interface can read their intentions. Haynes' research takes these developments a step further, and presumably, at some time in the future it will be possible for people's abstract thoughts and intentions to be read.

Inevitably, in the dark recesses of some bureaucrat's mind, plans to exploit this science in less noble ways are probably being drawn up right now. How comfortable would we feel about authorities arresting people based on a crime they were yet to commit (a la Minority Report)? Not to mention how marketing departments may use such technologies. And if "mind reading" technology does become available, how would it change the dynamics of friendship, or society itself?

Related articles:
Liar, Liar, Your Prefrontal Cortex Is On Fire
Letting The Brain Out Of The Box
Scan A Brain And Predict The Future
Chaotic Neurons Enhance Brain's Processing
A Computer In A Single Neuron