Lunar Prospects Up In The Air 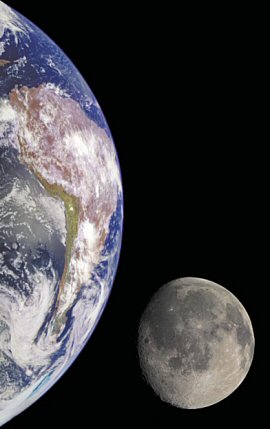 With new discoveries of moons orbiting distant planets, it might be appropriate to consider the current state of affairs for the one in our very own backyard. Sure, it may not be much to speak of; a barren lump reflecting the sun's rays and whose glow has sparked the imaginations of many a romance and horror writer. But romantic notions aside, the moon promises much in the way of minerals and energy, as well as NASA believing that the moon will provide a stepping-stone - in the form of a lunar base - to planets such as Mars. Despite Earthlings visiting the lunar surface and various spacecraft surveying it from afar, scientists can still only speculate as to its exact composition. Its shape, too, has proved to be something of a mystery, with past Apollo missions noting the moon's wobbly, non-sphericalness. Yes, we know that the lunar surface has been at the wrong end of some heavy meteor activity, which explains its superficially pockmarked surface, but meteors alone cannot account for the moon's contorted shape. And as it happens, the future of NASA's moon base, and other lunar resource ventures, may be dependent upon a fuller understanding of the moon's mysterious and violent history.

In December 2005, President George W. Bush signed off on a bill that points America's space program in a new direction. Bush's "Vision for Space Exploration" pictures an end to shuttle flights after September 2010 and the establishment of a base on the moon by 2020 as a stepping-stone for a human mission to Mars. With each new space program potentially costing billions of dollars over many years, Bush's new vision has given the number crunchers at NASA a massive migraine.

To save money, fiscal managers at NASA have recommended that the agency shutdown all but one shuttle launch pad for the remaining shuttle flights. But the Bush administration is determined to continue shuttle flights and finish building the International Space Station (ISS) before launching the ambitious moon program. "Our first goal is to complete the International Space Station by 2010. We will finish what we have started," said Bush. Unfortunately, with cost blowouts stemming from the Iraq war and hurricane Katrina, it's unlikely that NASA can afford to do both.

Whatever the future of NASA's own moon program, the moon looks set to spark a new competitiveness between Russia and the US that harks back to the old "space race" days. The Russians are also making moves, or at least noises, that indicate their interest in building their own bases on the moon. At a conference held at Bauman Moscow State Technological University on January 25, Nikolai Sevastyanov, head of the Energia space corporation, was quoted by ITAR-TASS news agency as saying: "We are planning to build a permanent base on the moon by 2015." Despite Russia's enthusiasm to get to the moon, their financial situation is also questionable, with several news reports claiming that Sevastyanov's comments were less of a prediction and more a sales pitch aimed at attracting government dollars for next generation spacecraft.

But what is it that these potential future competitors are really after? The US speaks of using the moon as a means to get to Mars, but they do not necessarily mean in terms of distance, as there is evidence that the moon is a rich source of natural resources. The most talked about resource is Helium-3, which is a non-radioactive isotope of helium used in nuclear fusion. The Russians claim that after building bases on the moon they: "can begin the industrial-scale delivery of the rare isotope Helium-3," said Sevastyanov. "Ten tons of helium-3 would be enough to meet the yearly energy needs of Russia," he added.

There is no reason to doubt that a lunar base used to mine the moon for its resources is feasible. But some of the latest research regarding the geography and composition of the moon suggests that industry and space agencies should not get too excited just yet.

Ohio State University (OSU) planetary scientists believe they have discovered what it was in the moon's early history that caused the feature we all know as the "man in the moon." What on Earth has this got to do with a space race and lunar resources, you say? Everything, according to OSU's Laramie Potts and Ralph von Frese. Their new study on the moon not only casts new light on the Earth's geology, but also the viability of lunar prospecting and mining.

During the early Apollo missions, scientists discovered that the moon was not perfectly spherical, with its surface distorted in two locations. One theory that did the rounds was that the Earth's gravitational pull caused the distortion early in the moon's history when the moon's surface was still molten and malleable. The OSU team dismisses this hypothesis, instead claiming that the misshapen moon is the result of an ancient lunar impact. The team says that the impact occurred on the far side of the moon and sent a massive shock wave right through the core of the moon to its Earth-facing side. When the moon's crust finished recoiling from the impact, it left the scars on its surface that we see today, and also explains the feature known as the man in the moon.

Potts and von Frese say they came to these conclusions after using gravity fluctuations measured by NASA's Clementine and Lunar Prospector satellites to plot the moon's center. At first, the pair observed what they expected to see, old impact sites leaving imprints down to the mantle. When the researchers examined data representing the larger impact they also saw nothing exceptional, with the mantle sinking down as it recoiled and absorbed the impact. 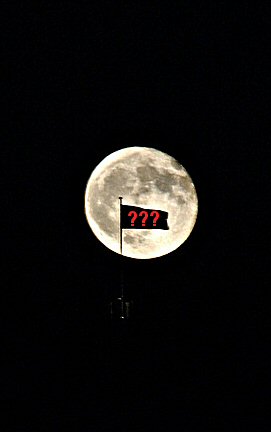 The big discovery came when the team noticed that a segment of the mantle still protruded from the core of the moon 700 miles directly below the point of impact. The team was surprised by this revelation. "People don't think of impacts as things that reach all the way to the planet's core," von Frese said. Even more astonishing is that the impact continues right through the moon, with a depression on the far side, a bulge on the near side and another bulge on the moon's Earth facing surface. The object that caused such a violent impact could have been any large object, with the most likely candidate being an asteroid about 4 billion years ago. The team explained that because the moon was closer to the Earth during this period, the gravitational pull was far greater. This meant that when magma erupted onto the surface of the moon, the Earth's gravitational pull did not let it subside, ensuring that the surface of the moon would remain distorted. "This research shows that even after the collisions happened, the Earth had a profound effect on the moon," Potts said.

Van Frese explains that the magma release was probably the result of "hot spots" caused by the deep impacts that the moon was subjected to. It's unlikely that the Earth escaped similar tribulations, and van Frese believe that many of the Earth's hot spots - such as the Hawaiian island chain - were created in the same way. "Surely Earth was peppered with impacts, too," he said. "Evidence of impacts here is obscured, but there are hot spots like Hawaii. Some hot spots have corresponding hot spots on the opposite side of the Earth. That could be a consequence of this effect," he added.

As it happens, the research that van Frese and Potts are conducting is NASA funded, a non-coincidental circumstance that has everything to do with the space agency's new responsibility of returning astronauts to the moon to prospect for valuable resources. But van Frese and Potts are measured when they discuss what future prospectors may find beneath the moon's surface. They explain that while scientists can calculate what minerals should be there, the impacts, and their severity, dictate that the minerals have probably been shuffled around so much that finding them could be problematic without the aid of gravity measurements.

"We don't fully understand the way these minerals settle out under temperature and pressure, so the exact composition of the moon is difficult to determine. We have to use gravity measurements to calculate the density of materials, and then use that information to extrapolate the likely composition," Potts said. "Once we have more rock samples and soil samples, we will have a lot more to go on. Nothing is better than having a person on the ground," he added.

This comment supports von Frese's claim that a lunar base would be needed before scientists can be completely sure of what lies beneath. And with the Russians claiming that the answer to all our energy problems is tied to having bases on the moon, it's clear that the big sell for the next space race has begun.