The Hitchhiker's Guide To Mars Rovers 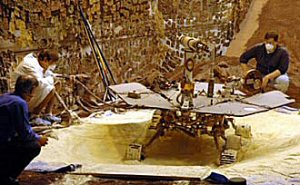 In 2003, the American space agency NASA launched the exploration rovers Spirit and Opportunity to explore Mars. But it seems that instead of searching for life on the red planet, they may have planted it there. Earlier this year, NASA engineers at the agency's spacecraft assembly plant in Pasadena, California, confirmed that microbial Earthlings had hitched a ride to Mars inside the rovers' electronic circuitry.

The bacteria, bacillus safensis, was found in a chamber at the Pasadena facility which had been used to test the rovers. It is likely that some of the microbes, possibly from scientists' skin, were on board when the mission was launched. Bacillus safensis is highly resistant to gamma and ultraviolet radiation and can draw energy from the ions of trace metals such as aluminum and titanium. The presence of the highly resilient bacteria at the Pasadena facility was confirmed by NASA microbiologist Kasthuri Venkateswaran. Tests by Venkateswaran showed the microbes could survive both the journey itself and Mars' frigid climate.

Surprisingly, such events were anticipated nearly forty years ago, when the United Nations established a treaty that it hoped would prevent the contamination of other planets from terrestrial germs carried on spacecraft.

NASA has not commented publicly about a possible breach of the UN treaty, and officials there have said it was highly unlikely that microbes from Earth would survive the journey through space, let alone a descent through Mars' atmosphere.

But Sydney microbiologist Tony Taylor thinks NASA could be wrong. He contends that microbes from Earth could survive quite happily in Martian soil. "Microbes survive in space as NASA has already proven from studies of hardware retrieved from the Moon," he said. "The strain of bacillus that was detected in the [Pasadena] test chamber is highly unlikely to establish itself on Mars, because it requires oxygen to live and grow. But for every species of microbe that can be cultured, there are at least four more that cannot be cultured, so we don't know anything about the other potential hitchhikers and their suitability to colonize the Martian environment. I personally think there is between a 1:1000 and 1:50 chance that Mars will become infected from the mishap. If manned missions are sent to Mars there will be a 1:1 chance of this occurring." 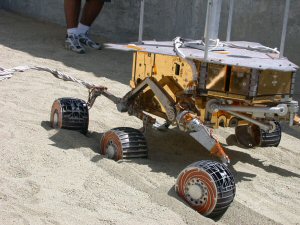 Taylor, who says his views on this subject don't reflect those of his employers at the Australian Nuclear Science and Technology Organization, sees manned space missions as nothing more than wanton vandalism. "Robots can be sterilized, humans cannot," he said. He believes that NASA should have discovered the rovers were contaminated with micro-organisms before they were launched using a simple test culture. Taylor added that by contaminating other planets, either accidentally or deliberately, multi-million-dollar science experiments now under way around the world would be compromised.

Did NASA deliberately plant the bacteria to kick-start the process of terraforming the seemingly dead planet? Perhaps for that rainy day when Earthlings have to flee a nuclear apocalypse or mega-disaster threatening life on our planet? Probably not, but Taylor thinks there are other motives at work. "They [NASA] are clearly dodging the issue," he said. "I don't think NASA want to terraform Mars, I think that politicians are persuading NASA to turn a blind eye to the evidence for life that is already there."

Taylor didn't speculate on why the discovery of life on Mars might be such a politically hot potato for NASA, but he believes there is already compelling evidence to suggest the existence of living organisms.

He cites the relatively high amounts - about 20 parts per billion - of methane, formaldehyde, hydrogen and ammonia already detected by the European spacecraft Mars Express. These gases can be an indicator of active microbial communities. Whether these gases are being produced by microbes is unknown, but they were detected in pockets near the region where the Viking I spacecraft landed in 1976.

Did Viking 1 seed the landing area with microbes that are now producing greenhouse gases? Taylor said something must be producing the methane, as it exists for only a short time in the Martian atmosphere. He suggests either volcanic activity or microbes - lots of them. 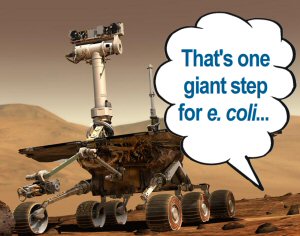 Taylor said the evidence for active microbial communities was open to several interpretations. It's possible that Mars was sterile and the Viking landers - and perhaps other spacecraft - had microbes on board, or, Mars was already alive with a well-established microflora. Regardless of which hypothesis is correct, Taylor said there is life on Mars now.

So how will we know whether life on Mars descended from life on Earth or vice versa? "Simple DNA tests will be able to tell quite easily," Taylor said. "Sequencing machines are quite portable and require low levels of power." But Taylor posits that the problem might not be solved so easily. "The trouble is that such tests might overlook indigenous Martians if they are different to terrestrial microbes. What if they don't use DNA as their genetic code?"