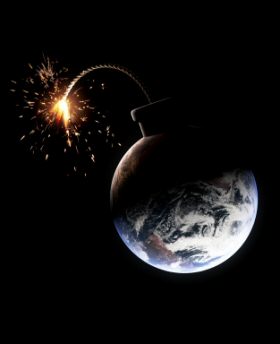 As scientists continue to grapple with the complexities of climate change, one thing is becoming abundantly clear: each of Earth's seemingly discrete environmental systems is crucially dependent upon another. This basic yet important observation has led scientists to reconsider a controversial idea first proposed in 1970 by the independent scientist and author James Lovelock. The Gaia Hypothesis simply states that the Earth's atmosphere, biota and oceans interact so as to behave as a single organism, which continues to sustain the most favorable environmental conditions for life. Furthermore, the hypothesis states that Darwinian selection favors organisms capable of maintaining this balance, and the continued existence of the Earth organism and its constituents. Sound far-fetched? Perhaps, but Gaia may yet prove to be a powerful tool in our quest to understand global environmental change.

Lovelock's idea, that the Earth be considered a living organism, has been gaining traction among certain science types since the late 90s, who - in an attempt to distance themselves from the mystical connotations of the Earth goddess Gaia, or "Mother Earth" - have re-jigged and renamed it Earth System Science. Earth System scientists want to understand how Earth systems work in concert, and, more controversially, whether they are somehow purposefully stabilizing the Earth. This kind of self-regulatory system is a well-known property of open systems. It's known as homeostasis and is effected by dynamic equilibrium adjustments that maintain stability. But critics of this hypothesis, such as Richard Dawkins and Stephen Jay Gould, have argued that since natural selection acts upon individuals, it is not clear how homeostasis could be applied on a planetary scale. Critics also say that the idea reeks of a teleological argument, as it suggests that each organism on Earth has a predetermined purpose to perform.

Since the 90s, Lovelock has strived to distance himself from the idea of a purposeful biomass, charged with regulating the Earth to ensure it and its constituents continued survival, or, that the Earth is in any way alive. Instead, Lovelock, along with most Earth System scientists, sees Gaia as simply a good metaphor to visualize how Earth systems work in unison to maintain a prevailing environmental state. Lovelock states in his latest book, The Revenge of Gaia, that this in no way precludes the system being tipped over the edge and sliding into a state that is not fit for most of the organisms currently inhabiting the Earth. In fact, Lovelock says that we humans have pushed Earth's systems over the edge and past the point of no return.

"It's far too late, hopelessly too late. We are wasting our time and energies on all the wrong things. We have to face up to the fact that we are about to enter a major war with our own planet," said Lovelock in a recent radio interview. "There is a huge challenge and problem before us of surviving ourselves and making sure that civilization survives." In his own way, Lovelock has hit the nail on the head, and got to the heart of the matter; telling us that because we have upset the balance that has prevailed for the last 650,000 years, the Earth is giving humanity its eviction notice.

Lovelock's environmental appraisal is bleak, with an even bleaker strategy for survival: run for the hills! "There will be mass migration of life and of people towards the remaining habitable parts," predicts Lovelock. Plan B seems to consist of devising a system in which to make these migrations in an orderly and civil fashion. Lovelock's view, while it may be correct, is, perhaps, verging on the irresponsible, as it suggests little hope and therefore no incentive to encourage environmental policy change, which plays right into the hands of those who might say; "If our fate is sealed, I guess it's business as usual." But Lovelock's rationale for such an outlook is nonetheless interesting, even if it does involve yet more metaphorical musing. 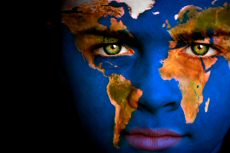 Lovelock claims that humanity's timing is terrible, as we're pumping greenhouse gases into the atmosphere in the middle of an interglacial period. During such periods, Lovelock says, the Earth is in a state akin to someone in the grips of a fever. He posits that the Earth, like a feverish human, goes into positive feedback, because the systems that normally regulate temperature go into reverse. So, in the case of the feverish person, they would shiver when they are hot, rather than when they are cold. In regard to the Earth, says Lovelock, "this means that small amounts of carbon dioxide could have been put into the air with impunity in the middle of the Ice Age." But during an interglacial period; "Their effect is amplified by the positive feedbacks and is much larger than would ordinarily occur. We always have to keep in mind that farming, taking away the natural ecosystems of the Earth that do the regulating, is just as harmful as putting gases in the air. So it's a kind of double whammy at the wrong moment for the Earth."

By all accounts, the latest Intergovernmental Panel On Climate Change (IPCC) report, "Climate Change 2007: The Physical Science Basis," does paint a fairly dark picture of how human activity has led to the situation we are currently in, stating: "The understanding of anthropogenic warming and cooling influences on climate has improved... leading to very high confidence that the globally averaged net effect of human activities since 1750 has been one of warming." However, the IPCC has not yet thrown in the towel, instead offering recommendations to implement change. But climate change is just one aspect of environmental change, and Earth system scientists say that greater emphasis needs to be put not just on the drivers of climate change, but also on human activities that adversely affect environmental change as a whole. There are currently attempts to better understand the Earth in terms of a dynamic system, including The International Geosphere-Biosphere Programme (IGBP), which is a research program using a multidisciplinary approach to studying global change.

Set up by the International Council for Science (ICSU) in 1987, and working in collaboration with three other global environmental change programs, the IGBP claims to study: "the interactions between biological, chemical and physical processes and human systems." This month, the IGBP came out in praise of the IPCC for its latest report (whose authors include a number of IGBP's Earth System scientists), but added that climate change is just one of many "symptoms" displayed by a planet that is under extreme pressure from human activities. Kevin Noone, IGBP's Executive Director, states that as much as half of the Earth's land surface is dedicated for human use, fisheries are being over-exploited, and that the Earth is in the middle of its sixth greatest extinction event. As a result of these factors, says Noone, we must consider the Earth as a "coupled system."

"The study of the Earth as a system, looking not only at climate but also at changes in the oceans and on land, how those changes affect each other, and the role of humans as part of that system is a crucial approach to managing a sustainable planet," says Noone.

The concepts central to Earth System Science are catching on, and an increasing number of researchers around the world are focused on how humans can survive the coming "war with Earth" by visualizing our planet as an entire system. "Predicting the evolution of this interactive system under global perturbations by human activities is key for the sustainability of Planet Earth," says IGBP's Chair, Carlos Nobre. Whether you buy into the idea of Gaia or Earth System Science, or still cling to the old Earth Mother mythology, what is becoming abundantly clear is that we are all part of the same system.