Down On The Farm? Yields, Nutrients And Soil Quality 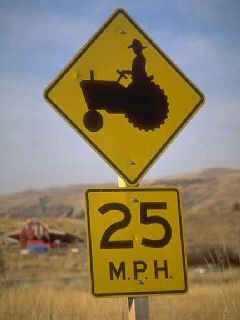 Today, modern agriculture supplies us with a surfeit of just about any food we might desire, but at what cost? While systemized, large-scale agriculture delivered last century's much ballyhooed agricultural revolution, history tells us that unsound farming methods can cause the collapse of civilizations. As Jared Diamond has frequently pointed out, past civilizations have literally farmed themselves to death, by ravaging surrounding resources, using habitat-incompatible farming methods, and living at a resource deficit; which all inevitably leads to societal collapse. Now, it seems, Western civilization may once again be staring down the barrel, as studies into today's commercial farming practices show that they are having a negative effect on crop yields, nutrient content and the environment.

Large-scale farming dates back to around 5,000 BC, when the Sumerians moved on from subsistence farming to methods that required large tracts of land and a sizeable labor force. Then, some centuries later, enterprising Romans honed these Sumerian farming techniques, so that they could cultivate crops and use them as another source of trade. Down through the centuries, techniques such as crop rotation, plant selection, crossbreeding, mechanization and industrialization led to a renaissance in farming, and an explosion of culinary delights at our fingertips. But while we grumble about the wonky wheel on our supermarket trolley, or the long cues at the checkout, some very real agricultural problems are now starting to emerge.

There has been a lot of press about the effects of herbicides and pesticides on human health, but it is now becoming apparent that "agrichemicals" - herbicides, synthetic fertilizers and pesticides - are detrimentally affecting the fundamental growth mechanisms of plants. Scientists from the University of Oregon have just finished a multi-year study into the effects that artificial chemicals, such as the insecticide pentachlorophenol (PCP), have on crops; either through direct application or run-off. In their paper, soon to be published in the Proceedings of the National Academy of Sciences (PNAS), the team writes that around 20 of these chemicals interfere, to varying degrees, with the natural process of nitrogen-fixing communication between plants and soil bacteria.

Nitrogen fixing is the process by which nitrogen in its molecular form (N2) is absorbed out of the atmosphere by plants and transformed into nitrogen compounds, such as ammonia. Nitrogen fixing is important to the success of market crops, as the ammonia produced acts as a natural fertilizer. But most market crops are dependent upon rotation legume crops - the predominant family of nitrogen-fixing plants - such as alfalfa and soybeans to do the fixing for them. This is because legume plants have the special ability of secreting a chemical signal that "enlists" friendly bacteria to convert nitrogen into ammonia. Which is where the problem lies. 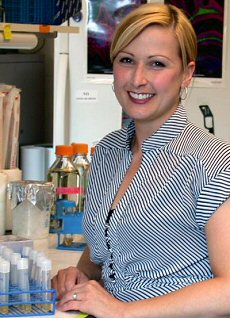 The team of scientists, led by Jennifer E. Fox (pictured), a postdoctoral researcher in the Center for Ecology and Evolutionary Biology at the University of Oregon, found that artificial chemicals that come into contact with legumes block the plant's ability to enlist bacteria. "Agrichemicals are blocking the host plant's phytochemical recruitment signal," said Fox. "The agrichemicals are cutting the lines of communication between the host plant and symbiotic bacteria. This is the mechanism by which these chemicals reduce symbiosis and nitrogen fixation."

The upshot of this is that crops don't get the natural fertilizers that they require, which results in a "vicious cycle" of increasing use of agrichemicals in subsequent years to try and boost crop yields, explains Fox. "We showed that by applying pesticides that interfere with symbiotic signaling, the overall amount of symbiotic nitrogen fixation is reduced. If this natural fertilizer source is not replaced by increased application of synthetic nitrogen fertilizer, then crop yields are reduced and/or more growing time is needed for these crops to reach the yields obtained by untreated crops."

This previously unconsidered explanation for progressively poorer crop yields just adds to a growing list of farming woes, which researchers like Fox have known about for years. Farming methods such as overuse and tillage also lead to poor soil quality, explains Fox, because it strips the soil of nitrogen and phosphorus, interrupts root structures, and upsets nitrogen-fixing bacteria. In fact, farming methods and poor soil quality have become so synonymous that a slew of books are being released on the subject.

In the book Dirt: The Erosion Of Civilizations - perhaps a nod to Diamond's Collapse: How Societies Choose To Fail Or Succeed - author David Montgomery, a University of Washington professor of geomorphology, warns that we humans are stripping the Earth of its fertile soils with our archaic farming methods. Over thousands of years our ancestors used the land to farm, and when that land became barren, they moved on to more fertile lands.

But now that thousands of years have passed, and we continue to rely on age-old farming techniques, Montgomery warns that the grass is no longer greener on the other side. "We're doing the same things today that past societies have done, and at the same rate," says Montgomery, who spends most of his time studying the evolution and structure of the Earth's surface. In short, Montgomery believes that we are slowly skinning the planet of its life-giving soil. "It only takes one good rainstorm when the soil is bare to lose a century's worth of dirt," laments Montgomery.

Citing tragic periods in America's history, such as the desolate Great Plains during the Dust Bowl of the 1930s - a hopelessness, and bleakness articulated in John Steinbeck's novel the Grapes Of Wrath - Montgomery lays the blame squarely for such miseries upon primary farming methods. He explains that plowing underneath crop remains, even on flat lands, loosens and exposes the soil to winds and erosion for extended periods, and eventually, drives people off of their farming lands.

Such erosion is expected on sloping lands, where rain and wind constantly reshape hills and mountains that have no vegetation coverage. "If you take sloping land and strip the plants away, it leaves the soil bare and exposed. There will be a huge impact the next time it rains or when the wind blows," says Montgomery. "Plow-based agriculture can change the erosion rate of even a flat place like Kansas into the erosion rate of a place like the Himalayas. Basically that type of farming is remaking the surface of the planet."

Stripping lands of their topsoil in this way is one of the primary reasons that people move about on this planet, says Montgomery, to find new farming areas and repeat the process. But with now more than 6 billion hungry mouths to feed, Montgomery thinks it's finally lunch... er, crunch time. That is, there are no longer any rich new areas to farm. "We're farming about as much land as we can on a sustainable basis, but the world's population is still growing," says Montgomery. "We have to learn to farm without losing the soil." But how do you turn and prepare the land without risking the topsoil?

The answer, according to Montgomery, is that you don't. He says that we should give up tilling agriculture altogether, so that soil erosion approaches something closer to its natural rate. Instead, tilling and plowing would be replaced by a method called disking, where crop stubble is mixed in with the valuable topsoil. The one downside is that more herbicides may be required to keep an inevitable increase in weeds down, but he adds that less farm machinery fuel would be needed to tend crops. "We don't have to farm the way we do. It's as much a matter of culture and habit as it is of economics, and our habitual ways of farming have gotten people into a lot of trouble through the years," explains Montgomery. "It's more of a conceptual shift than anything else, but it's a conceptual shift that conserves the soil."

Only about 5 percent of the world's farmers - mostly in the US and Latin America - use no-till methods, says Montgomery, so it could be some time before we see a shift in farming practices. Let's hope it won't be too late.