Did Civilization Emerge Thanks To A Change In The Weather? 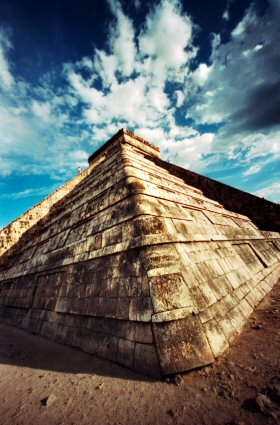 In Collapse: How Societies Choose To Fail or Succeed, Jared Diamond sets out to determine what causes a society to fail and eventually collapse. The five factors that Diamond believes drive societal failure are: hostile neighbors, loss of trading partners, environmental damage, climatic change, and how societies respond to these potentially devastating environmental problems. The general assumption is that civilizations evolve from benign environments that sustain what we may consider a natural state of being, but where poor resource management will lead to certain failure. The point has been received well by many who believe Collapse to be an adequate exploration of societal failure. And yet the subsequent arrival of another hypothesis has turned Diamond's theory on its head by arguing that climate change doesn't always spell the end for civilizations, but can actually drive the formation of complex and sophisticated societies.

Dr. Nick Brooks, a Senior Research Associate at Tyndall Centre for Climate Change Research, had an interesting hypothesis lined up for his audience at the BA Festival of Science earlier this month. Using evidence from archaeological digs and the palaeoclimatic record, Brooks claims that significant changes in social organization have coincided with abrupt climate change. But Brooks isn't referring to yet another ancient civilization collapsing. Rather, he suggests that the changes societies undergo can be adaptive responses to climate change. In fact, Brooks argues that what we call civilization is in fact the by-product of these social adaptations to environmental change. "There is widespread evidence that climatic and environmental stress played a major role in the emergence of early civilizations, and that aridification in particular acted as a trigger for increased social complexity associated with urbanization and state formation," says Brooks.

It's easy to assume that Diamond and Brooks' arguments are at odds, but on a general level they actually dovetail, revealing the precarious situation that modern day societies find themselves in, and the decisions that they must eventually make.

The evidence that Brooks draws on relates to the formation of Egyptian, Mesopotamian, South Asian, Chinese and northern South American civilizations between 6,000 - 4,000 years ago. During this period these regions experienced climate change due to variations in the Earth's orbit, which led to a weakening of monsoon systems and more arid conditions. The subsequent dwindling of resources resulted in nomadic peoples converging upon what resources remained, which in turn resulted in societal hierarchies able to manage large bodies of people. It is plausible that the necessity to settle permanently in the Nile Valley, coupled with a likely increase in population due to immigration resulting from the desertification of the surrounding Saharan regions, stimulated both technological innovation and further social stratification. "Current models of Egyptian state formation suggest that the northward expansion that led to unification followed a period in which competing proto-state entities coalesced in Upper Egypt in the late sixth millennium BP [before present]," explains Brooks. "It is tempting to interpret such a process within a context of both cooperation [between the constituent elements of such entities] and conflict [between entities] driven by the need for collective security in a time of instability and dwindling resources."

Of course, this isn't to say that societies don't collapse due to bad management and environmental pressures, as Diamond suggests, but then nobody's saying that societies always overcome adversity or make the right ecological decisions. Brooks concedes that societies can succumb to environmental pressures, and that societies facing similar climactic problems may employ different strategies with different outcomes. "The purpose here is not to present a case for climatic determinism," says Brooks, "rather to illustrate that climatic and environmental change of a kind usually associated [correctly or incorrectly] with the collapse of civilizations also appears to have played a significant role in the emergence of the very same civilizations."

This take on civilization runs counter to long held beliefs that society as we now know it emerged from the single transition from the debilitating environment of the last ice-age to more favorable benign conditions. "Civilization did not arise as the result of a benign environment which allowed humanity to indulge a preference for living in complex, urban, civilized societies," says Brooks. "On the contrary, what we tend to think of today as civilization was in large part an accidental by-product of unplanned adaptation to catastrophic climate change. Civilization was a last resort - a means of organizing society and food production and distribution, in the face of deteriorating environmental conditions."

It's not hard to see how the necessity of this "temporary" measure that we call civilization is what led (and still does) many of the citizens to experience social inequalities, crime, exposure to disease, and harsh work conditions. In short, the pay off for living in a secure environment meant that people had to work a lot harder, were exposed to more hardship, and were generally less healthy.

Brooks also adds that the hierarchical structures of power that have been a consequence of civilization mean that a few powerful people can exploit the situation, and therefore have a vested interest in maintaining the status quo. But if civilization really is only a temporary fix put in place during the enormous climactic upheavals of past generations, then this attitude is not conducive to further adaptations if they are required.

So, on the one hand we have Diamond telling us that preventative measures must be put in place now, as the technological fixes used to advance society to date have contributed to the problems that we are currently experiencing. Smarter farming practices, a reduction in fossil fuel emissions and the development of greener technologies should be invested in. On the other hand, we have Brooks showing us how humans adapt to their environment after the fact. But Brooks also notes that: "The nature of early civilizations varied considerably, and there was no single trajectory followed by societies as they adapted to increasing aridity." This means that the action we take now will have far reaching consequences for the future. In this respect, both Diamond and Brooks are urging for us to look closely and learn from history.

Irrespective of whether future climate change is the result of human activity, both Brooks and Diamond agree that climate change will occur in the future as it has in the past. And how we address these concerns seems to be the point in question. It would be ironic if the very civilizations that emerged as a way to deal with climate change eventually rendered us static and unable to adapt.