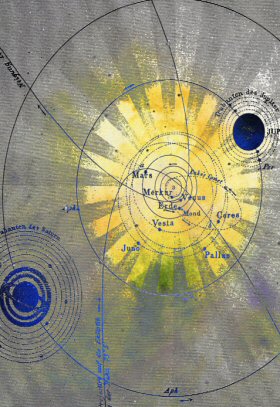 Many space buffs felt a queasy sense of dislocation when the non-planet formerly known as Pluto was unceremoniously hustled out the observatory back door by some shady looking professorial types. To the person in the street, this change in status may seem entirely arbitrary, but change is an important aspect of science, and is essential if our models of reality are to be updated and refined.

Within the realms of the observable classical world, nothing has epitomized this philosophy more dramatically - or publicly - than the demotion of Pluto. The high drama and media saturation of the International Astronomical Union's (IAU) amendment was unusual for the science world, and was worthy of inclusion into glossy gossip mags and tabloids. It was like some A-list Hollywood celebrity had just died at the height of their career, but in the end was discovered to be a dachshund.

In coming to grips with our changing understanding of the cosmos, it's worthwhile to perhaps take some direction from the quantum world. While discussing Niels Bohr's philosophy on what science can know about the nature of quantum-level reality in his tome The Road To Reality, Roger Penrose explains that while science seeks to understand reality, it uses representational mathematical models to accomplish this. The implication, obviously, is that the observer's reality begins to alter as they acquire more information about the system being observed, leading Penrose to summarize Bohr's position as: "it is the knowledge that jumps, not the physics of the system." It seems a very basic concept, but as time rolls on it is sometimes forgotten that what we know about the universe is based on mathematical theories used to predict certain phenomena. That is, what we know of reality is determined by how accurate our representations of reality are.

Sometimes it's hard to avoid a niggling feeling that if our models are anthropic in nature, then scientists might simply be chasing their own shadows. If we know the laws of nature, then why, oh, why should anything be a surprise?

Well, identifying natural laws is one thing, but predicting the outcomes associated with those laws can sometimes be a hit-and-miss affair, and can, on occasion, surprise us. Take for example the very recent discovery of a special kind of supernova (called SNLS-03D3bb) that should not by any account behave the way it does. In the September 21 issue of Nature, scientists affiliated with the SuperNova Legacy Survey (SNLS) revealed that they had discovered that more than one type of Type Ia supernova exists. Wahoo! Sorry� What's a Type Ia supernova, again?

Until now, they were considered to be a class of exploding stars uniform in every way. This was rather useful because they could be used as astronomical "standard candles" for measurement across cosmological distances. "Type Ia supernovae are thought to be reliable distance indicators because they have a standard amount of fuel - the carbon and oxygen in a white dwarf star - and they have a uniform trigger," explained Peter Nugent of the Lawrence Berkeley National Laboratory. "They are predicted to explode when the mass of the white dwarf nears the Chandrasekhar mass, which is about 1.4 times the mass of our sun. The fact that SNLS-03D3bb is well over that mass kind of opens up a Pandora's box."�

After examining all possible reasons for SNLS-03D3bb's uncharacteristic extreme brightness, Andy Howell, who discovered it: "put two and two together and realized that SNLS-03D3bb must have super-Chandrasekhar mass." This basically means that the supernova exploded after reaching a mass equaling twice that of the sun, which is supposedly impossible. "It should not be possible to break this limit, but nature has found a way," lamented Howell. "Now we have to figure out how nature did it."

Well, nature "did it" alright, and now scientists have to fix their reality models pronto. Or maybe not, as the team assures us that the expansion model of the universe has not been compromised because of this recent discovery. Hmm...

Anyway, such discoveries make it look as though scientists are making some headway toward... er, well, a greater understanding of whatever. But maybe these recent rule-breaking discoveries and amendments to how we perceive the universe have far spookier implications. If the big bang theory is correct, and the universe contracts and cycles through a continuum of big bangs, would the laws governing subsequent universes always be the same? "There is really no agreement on how the universe may have acquired its current set of physical laws/physical constants," admits astronomer Rychard Bouwens, who recently used the Hubble telescope to explore the formation of galaxies during the first 900 million years after the Big Bang. So, what if alternate physical laws did exist and were clashing out there in the great unknown, via some as yet unproven conduit?

In May of this year, scientists Charles R. Keeton, an astronomy and physics professor at Rutgers, and Arlie O. Petters, of Duke University, announced that they had detected an extra dimension of space. The duo's work is based on a recent theory called the type II Randall Sundrum braneworld gravity model, which says that our universe is just one of many situated within a much larger universe. The braneworld universe has 5 dimensions (4 spatial plus time), compared with the 4 dimensions (3 spatial plus time) at the heart of general relativity. The team says that they have developed tests that could predict whether the theory holds any water, and that these could be utilized as part of a number of future satellite launches. "If the braneworld theory proves to be true," says Petters, "this would upset the applecart. It would confirm that there is a fourth dimension to space, which would create a philosophical shift in our understanding of the natural world."

It certainly would upset the applecart, perhaps even tip it over, if these other braneworlds, each with their own physical laws governing their behavior, interacted with one another. Wouldn't that produce some otherwise inexplicable behavior in our own universe? It's food for thought. But if that's too much speculation for you, at the very least the current kafuffle surrounding Pluto and supernovae should indicate that we should never get too comfortable with scientific consensus. The "rules" of the game are perhaps not always as solid as we'd like to think.