Contrails And The Dark Side 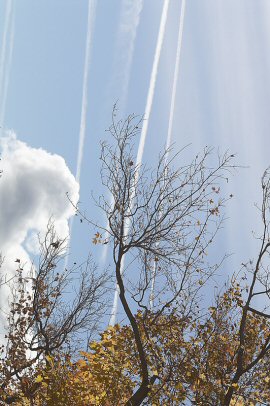 By now we're all familiar with global warming and its predicted consequences, even to the extent where people are finally listening to longtime environmentalist Al Gore! But in order to curb global warming it's likely that there'll be a number of lifestyle sacrifices we'll need to make. Arguably, one of the most inconvenient of these would be air travel. Jets certainly pump out their fair share of greenhouse emissions, which would be reason enough to consider cutting back air travel, but jets add to global warming in yet another way. In case you haven't heard, the long trails of condensation known as "contrails" emitted by jet airliners are now considered to be a significant factor in global warming. Furthermore, a group of UK meteorologists recently found that night flights make contrail troubles considerably worse. With airlines expected to continue expanding their routes and increasing frequencies of flights; what can be done to make airline travel greener?

While floating peacefully high above the Earth's surface, shuttle astronaut Dr. Fred W. Leslie says that he "remembers seeing contrails stretched across the planet." Australian astronaut Andy Thomas also considered contrails one of the planet's most striking features. "One of the most readily visible signs of human presence is the occurrence of contrails from aircraft in the upper atmosphere. They are very long lasting, and can be seen over virtually all parts of the world... radiating out from cities, like spokes in a wheel," recalls Thomas.

A study conducted by Dr. Andrew M. Carleton, a professor of geography, and climatologist Dr. David Travis, observed anomalous changes in temperature during the unprecedented grounding of all aircraft after the 9/11 attacks. The researcher's analysis of temperature anomalies during the period September 11-14, 2001, clearly suggest serious implications in regard to global warming. "We show that there was an anomalous increase in the average diurnal temperature range for the period September 11-14, 2001, explained the paper, published in Nature. "Because persisting contrails can reduce the transfer of both incoming solar and outgoing infrared radiation and so reduce the daily temperature range, we attribute at least a portion of this anomaly to the absence of contrail," they added.

Like clouds, the ice crystals in contrails shield the Earth's surface from the sun's radiation during the day, and keep the heat in at night. In this way, contrails have reduced daytime temperatures and increased nighttime temperatures. Some researchers have argued that contrails (and also pollutants in clouds) have masked the full effects of global warming thanks to a phenomenon known as global dimming. On the face of it, global dimming sounds helpful, but it only makes the situation more complex. Last year, another study claimed that global dimming had actually ceased, and that we are now in an era of global brightening; perhaps, the authors suggest, because of changes in the number and composition of aerosols. It seems we can't win, as cleaning up the environment means that we may be subjected to the full effects of global warming, while not doing anything will continue to make our dismal predicament progressively worse. If you're stumped by this vexing conundrum, don't be. Meteorologists at the University of Reading, in southern England, have made some observations about contrails that show why getting rid of them is the better option.

Their paper in Nature claims that contrails will play a significant role in global warming as airlines continue to expand their businesses. The Reading team, led by Nicola Stuber, found that night flights contribute to climate change far more than day flights. It's a surprising result, according to the researchers, as night flights only account for 22 percent of Britain's annual air travel, but contribute to approximately 60-80 percent of the greenhouse effect attributed to contrails. "Flights during the nighttime are responsible for at least 60 percent of the climate warming associated with contrails, that's condensation trails, over the UK," said Stuber. But if contrails are merely amplifying the effects of clouds in regard to temperature regulation, intuitively you'd imagine that there would still be a balance maintained. But according to Stuber, it doesn't work that way. "The problem is that contrails during the day reflect some solar radiation back into space, and that leaves us with a cooling effect on Earth. Then, during the daytime and during the night time, they enhance the natural greenhouse effect of the atmosphere. So the problem is, at night time, you no longer have sunshine, so they no can longer reflect solar radiation, so the greenhouse effect of the contrails is no longer balanced. That's why a small proportion of flights have a large impact on the daily average climate warming effect," explains Stuber. So, what can be done?

"Rescheduling flights would certainly be one measure to think about if policy makers decided to reduce aviation, reduce climate change," suggests Stuber. Less night flights? Those cheap, red-eye specials considered an airline's bread-and-butter? Not likely! Add to this the fact that a 2005 European-wide investigation into contrails, conducted by the Imperial College London, discovered that contrails were not even factored into government assessments of the environment.

One way of reducing the occurrence of contrails suggested by the Imperial College investigation was to have planes fly at altitudes where contrails won't form. Pilots could drop slightly to these contrail-free altitudes when software detects that the plane is forming contrails. But the investigation also noted that lower altitudes mean slower speeds, which represents yet another unpalatable solution for commercial airlines.

The Imperial College team suggest that much of the responsibility for finding ways to reduce contrail formation rests with aircraft manufacturers. "There is little more that aircraft designers can do to increase engine fuel efficiency at high altitude, but designing new aircraft that can be as fuel efficient flying at 20,000 feet, as today's aircraft are at 35,000 feet, would help eliminate contrails."

Others believe that there are more clandestine measures available to fix the problem of contrail formation, but claim that the technology is a military secret. The B-2 bomber is a stealth aircraft, so it needs to leave as little trace of its presence as possible, which is why it allegedly leaves no contrails. How is this possible? In 2000, Air International magazine published an article about the B-2, and explained how it was that the B-2 didn't produce contrails. "As for elimination of contrails (normally a giveaway, even for a stealth aircraft), the USAF said chlorofluorosulphonic acid was injected into the jets to eliminate contrails." But the USAF later told reporters that it was done by "regulating exhaust temperatures." Air International considered this "nonsense," because: "contrails are ice crystals from water vapor left when hydrocarbon fuel is burned, and can never be eliminated by 'regulating exhaust temperatures.'"

Guesswork and denials aside, one commentator believes he can explain contrail-less military aircraft. David Hambling, author of Weapons Grade, says that the technology for reducing contrails has been available for some time. He refers to a technology called "plasma aerodynamics," that was first developed and researched by the Russians. The interest shown in plasma aerodynamics by military agencies worldwide lies in its alleged stealth capability. "The USAF appears to have been using plasma aerodynamics for decades. The Russians certainly know all about it, as does anyone who has bought the technology off them," says Hambling. "According to the patents, it has additional benefits too - it can muffle the noise produced by engines as well as preventing contrails from forming. The only people not enjoying its benefits are the civilian taxpayers who funded it in the first place."

I guess we'll just have to wait and see whether military agencies and governments consider global warming a big enough - or real enough - threat to our planet's future for them to disclose their coveted technology. Aircraft manufacturers are certainly key players in all this, but they are only effective as long as they can make new environmentally sound planes financially attractive to airlines (government subsidy, perhaps?). There are the allegedly contrail free High-Speed Civil Transport (HSCT) planes designed by NASA to look forward to, but who knows when that will become viable, and what new environmental problems they'll bring as baggage. Failing all that, we'll have to wait for commercial airlines to take the initiative and reduce or stop night flights; I'm not holding my breath though.