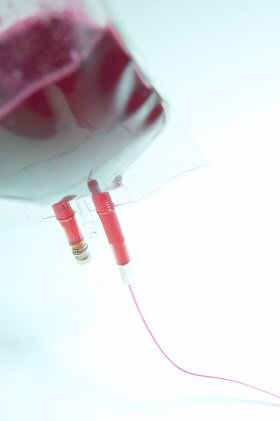 Whenever I think of leeches, which is rare, I think of the bloated, glistening specimens found hanging off Humphrey Bogart in the movie The African Queen. And the fact that they were probably inanimate props (the leeches, not Bogie and Hepburn) doesn't make me any less nauseous. Other musings on leeches turn to the quacks of bygone eras, who first bled their hapless victims... err, patients of blood, before also leeching them of funds. But these negative images of the leech soon dissipate when full consideration is given to the remarkable achievements made in modern medicine, thanks to the humble leech.

Contrary to Hollywood film depictions, you can find leeches in places other than the steamy tropical swamplands of the Amazon. In fact, zoologist Roy T. Sawyer has catalogued over 650 species of leech, and you can find them anywhere from freezing polar waters to the otherwise unforgiving climate of a desert. But despite the abundance of species, apparently only the fresh water Hirudo medicinalis can be used "as is" for medicinal purposes. So, what is it about the leech that has the medical community revisiting what was once thought to be quackery? Hasn't medicine already been-there-done-that to no apparent advantage, and as such retired the idea as nothing more than a kooky medical oddity? The answer seems to be no, because in 2004 the Food and Drug Administration (FDA) approved the leech as a medical device.

It turns out that 19th century physicians only had it half right, and were unaware of the real medicinal value of the leech. Scientists now know that it's not the bloodletting that's important, but rather the chemicals that the leech releases into the surrounding tissue. According to Sawyer, who claims to have established the world's first leech farm: "The key to success is the exploitation of a unique property of the leech bite, namely, the creation of a puncture wound that bleeds literally for hours. The leech's saliva contains substances that anaesthetize the wound area, dilate the blood vessels to increase blood flow, and prevent the blood from clotting," writes Sawyer, in A Sanguine Attachment: 2000 Years of Leeches in Medicine.

While Hirudo medicinalis is the only leech that can be used in its entire form (i.e. alive), Sawyer has also managed to do some of his own leeching of the leeches, and has so far patented over a dozen medicinal leech secretions. One such secretion has the ability to break down the protective barriers of certain types of bacteria, leaving it open to attack from the body's immune system. The implications and untapped potential of the leech in human medicine become even clearer when you consider, as Sawyer says, that: "leeches are pre-adapted to human physiology. The secretions from their saliva cross the entire spectrum of physiology: blood clotting, digestion, connective tissue, disease, pain, inhibition of enzymes, anti-inflammation. You name it, the leech has it."

There have been a growing number of medical success stories involving leeches in recent times, and, in spite of some initial resistance (from both doctor and patient alike), the use of leeches is now becoming far more commonplace. Leeches have been used successfully to treat osteoarthritic pain and cardiovascular disease, and in plastic and reconstructive surgery the leech has been no less than revolutionary. The special properties of the leech bite are especially useful in microsurgery, when doctors are trying to reattach human appendages. While doctors can usually suture larger arteries together successfully, they find it difficult to reconnect smaller veins. "With the venous circulation severely compromised, the blood going to the reattached finger becomes congested, or stagnant; the reattached portion turns blue and lifeless and is at serious risk of being lost," writes Sawyer. When a leech is introduced to the wounded area, however, a temporary venous flow is engaged, which manages to keep the reattached appendage alive. Repeated applications of leeches means that blood flow to the reattached appendage will continue until it has time to grow new veins. It is claimed that without the leech, many a finger, hand, leg or scalp could not have been successfully reattached.

Researchers into cardiovascular disease are also interested in the extensive list of molecules unique to leeches, which they believe could become useful in the treatment of cardiovascular problems. In a study published in the October 2004 issue of Molecular and Cellular Proteomics, researchers write about the wondrous anti-coagulant properties of leech secretions. "Most heart attacks and strokes are associated with a blocked artery," explains study author Oscar Yanes. "In some cases, blood clots may cause the blockage of arteries that leads to cardiovascular disease. People with cardiovascular disease typically have an increased tendency to form blood clots, and a decreased ability to dissolve clots before they can do any damage. Therefore, compounds interrupting the blood coagulation cascade may inhibit thrombus development."

Yanes and his colleagues at the Universitat Aut�noma de Barcelona started by analyzing the peptides and proteins found in Hirudo medicinalis to see if they had the potential to bind with serine protease molecules. The paper explains this process, dubbed "Intensity Fading MALDI MS," as a fast and extremely sensitive mass spectrometry-based analytical approach. The team considers it the right approach, as a large proportion of coagulation factors involved in blood coagulation cascade are enzymes that belong to the serine protease family. So any molecule that can bind to and block the action of these serine proteases is capable of preventing coagulation. The team located and isolated 16 molecules that could be considered viable coagulation inhibitors that had the potential to be used as drugs in treating cardiovascular disease.

Echoing Sawyer's own comments relating to the pre-adaptation of leeches to human physiology, Yanes states: "Leeches belong to an extensive family with a large number of species and subspecies, which have evolved highly efficient mechanisms to block blood coagulation. Considering the fast adaptation to this kind of nutrition, resulting in accelerated evolutionary selection and fixation of very specific interactions between serine protease inhibitors of the leech and proteases of the host, we think that screening additional types of leeches will lead to the discovery of very specific compounds blocking specific serine proteases of the coagulation cascade."

Most drugs derived from the secretions of leeches are still at the basic research phase; so effective treatments are probably some time off yet. But the capability of leech secretions to combat illnesses like cardiovascular disease is very real. Some conservative estimates predict that leech based drugs will improve upon the current leading anticoagulant, heparin, by over 30 percent. But currently it's still too early, and nobody really knows what the limits are. As Sawyer says: "Secretions from bloodsucking animals could be to cardiovascular diseases what penicillin was to infectious disease in the past." So next time a leech latches onto you, show it some respect.