Black Holes: Have They Reached Their Use-By-Date? 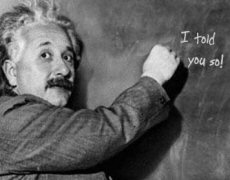 Black holes have garnered so much publicity over the years that they seem almost to have assumed themselves into existence, but on closer inspection the evidence underpinning their existence is not at all impervious to scrutiny. In fact, current research into black holes is turning up some fairly quirky results, which may prove correct Einstein's original hunch that black holes couldn't possibly exist, and ultimately show black hole advocates the door. As new observational devices and methods for detecting celestial objects become available, astonishing alternatives for phenomena normally associated with black holes - suspected to reside at the heart of most galaxies - abound. New theories include anything from dark matter or vacuum filled bubbles, to magnetic balls of plasma situated where a black hole should reside at the center of a quasar. Whether or not these theories represent a collective step toward a greater understanding of these mysterious celestial objects is anyone's guess.

To be fair, black holes (BHs) haven't really just been insinuated into reality, and scientists think that they have enough data and theory on their side to back up claims of their existence. But critics of BH theory are comforted by the knowledge that no one has yet seen a BH, and those supermassive celestial objects responsible for all manner of phenomena could in fact be anything. Theories suggesting that BHs may not even exist are bolstered further by a substantial weakness in BH theory; namely, the inability to reconcile Einstein's classical theory with quantum laws, which determine the behavior of fundamental fields and particles.

When the nuclear fuel of a star with a mass more than 3 times that of the sun runs out, it starts to collapse under the force of its own gravity, after which a singularity may form. Initially it was thought that such singularities might divulge the secrets of the universe's distant beginnings, but this, of course, turned out to be impossible. So much matter squeezed into such a small area of space creates a situation where nothing - not even light - can escape the powerful pull of gravity. Not without breaking some causal law, anyway. So getting a peek inside is out of the question. 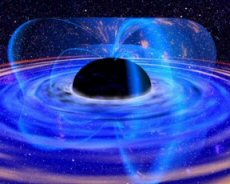 Formed along with the singularity is what is known as an "event horizon," which Roger Penrose, Emeritus Rouse Ball Professor of Mathematics, Oxford University, says is an "essential feature" of a BH. "An observer in a space ship would notice nothing in particular happening as the horizon is crossed from the outside to the inside," writes Penrose in The Road To Reality. "Yet, as soon as that perilous journey has been undertaken, there is no return." While our hapless observer continues to be dragged in toward the singularity situated at the center, the subsequent tidal effects, says Penrose, "would mount very rapidly to infinity, totally destroying the observer in less than a minute." The infinity property associated with BHs is based on a mathematical model that predicts matter will continue to cascade into an infinitely dense singularity, where space and time no longer hold sway. This may turn out to be different if, say, some new physical laws came into existence, which may arise as a consequence of finally merging classical models with quantum laws.

As it stands, however, scientists are quite happy to accept that BHs exist because of a number of measured phenomena that are quite convincing when correlated. Why? Well, when a BH orbits a companion star, for instance, it produces distinctive intermittent x-rays as it sucks up material from its counterpart's surface. These particular x-rays are integral to detecting BHs, as scientists use the x-rays to determine the BH's distinctive size and gravitational strength. But for some scientists, a nagging doubt still persists as to the true nature of the powerful bodies that exist at the center of galaxies.

A recent deep intergalactic survey conducted by a group of European and American scientists to ferret out supermassive black holes in nearby galaxies found, to their surprise, remarkably few of them. They presumed that because they couldn't find them, they must be hiding behind thick clouds of dust, which only the strongest of x-rays could penetrate. Based on data from the European Space Agency's International Gamma Ray Astrophysics Laboratory (Integral), only 15 percent of these hidden black holes were found, which was later revised by NASA to be around 10 percent. "Integral is a telescope that should see nearby hidden black holes, but we have come up short," said Volker Beckmann, of NASA Goddard and the University of Maryland.

The problem lies in the fact that even taking into account the hidden BHs that they have found, they cannot adequately account for the quantity of cosmic background x-rays already known to exist. One theory to explain the shortfall, according to team leader Loredana Bassani, is that these hidden BHs are better at hiding than scientists first thought. "The fact that we do not see them does not necessarily mean that they are not there, just that we don't see them. Perhaps they are more deeply hidden than we think and so are therefore below even Integral's detection limit," said Bassani. Not very encouraging, so it's not surprising that there's a swathe of alternative theories beginning to surface.

But let's back up a bit to what Penrose was saying about event horizons, as he claims that they are an "essential" aspect of BHs. If event horizons did not exist the universe would no longer be protected by the singularity at a BH's center, which is a very bad thing, in case you're wondering. As we've already discovered, physical laws related to time and space cease to exist, theoretically, near a singularity, so things could get really bizarre if not for the protective shield of the event horizon. So vital is this weirdness shield that Penrose argues that no singularity can ever be "naked," a hypothesis that he calls "cosmic censorship." Bassani might be confident that BHs are out there even though no one can seem to find them, but what if someone said that they had devised a theory showing that a particular BH did not have an event horizon? Would you call it a BH or a BS theory?

If no event horizon existed it would obviously mean that the consensus on black hole theory is either flawed or that black holes don't exist in the form outlined by those theories. But astrophysicist Rudy Schild, from the Harvard-Smithsonian Center for Astrophysics, says that there is even more bad news for black hole theory. Schild's paper, entitled "Observations Supporting The Intrinsic Magnetic Moment Inside The Central Compact Object Within The Quasar Q0957+561," is concerned with the characteristic properties of one particular quasar, called Q0957+561. The scientific consensus is that quasars are powered by the accretion of matter onto supermassive black holes within the nuclei of far-flung galaxies, and to test the veracity of this consensus Schild trained no less than 14 telescopes upon the quasar. As with other investigations as this type, Schild analyzed the flickerings of the quasar and used micro-lensing to determine its scale and internal properties.

Schild crosschecked all available data relating to black hole theories with his own findings and found that all of the "plausible black hole models" were "unsatisfactory." Schild considered the findings produced by his team's analysis to be extremely important, and described the center of the quasar as a "new non-standard magnetically dominated internal structure," which he thereafter dubbed the Schild-Vakulik Structure. Schild concluded that the Schild-Vakulik structure in quasar Q0957+561 was consistent within the context of the Magnetospheric Eternally Collapsing Object (MECO) model. Subsequently, Schild concluded: "Since observations of the Schild-Vakulik structure within Q0957+561 imply that this quasar contains an observable intrinsic magnetic moment, this represents strong evidence that the quasar does not have an event horizon." The existence of a MECO coupled with the absence of an event horizon means that there is not a black hole to be seen in Schild's theory.

If Schild's theory proves to be correct it would seem that black hole theory as we know it will cease to exist. Many scientists disagree with Schild's theory, and it will be interesting to see how events unfold in regard to the Schild-Vakulik structure. However, even if Schild's theory does turn out to be wrong, it still leaves science somewhat in the dark about black holes, or whatever massive objects lie at the center of galaxies. Perhaps there is some overlap of the differing theories posited, and inconsistencies between theories arise from us not yet having the full picture. Or maybe we need to distinguish what the other 90 percent of the universe is comprised of before we can arrive at any conclusions about black holes. Only time will tell.