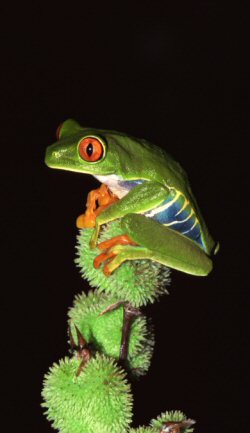 Developing a new technology from scratch is a complex and time consuming business, so wouldn't it be handy if scientists had a pre-existing blueprint at their disposal? As it happens, they do, and fortuitously it exists all around us: nature. And using nature as your template provides the added bonus of not having to worry about pesky patents. The science of copying nature, known as biomimetics, is not altogether new - think radar, Velcro and da Vinci's flying machines - but it is garnering increasing attention, with anything from the biomechanics of frog legs, to the sensing ability of rat's whiskers, being used as a basis for new inventions. And the field is likely to become much busier, because according to one industry insider, there is currently only a 10 percent overlap between biology and technology in terms of the mechanisms used. With such a treasure trove of potential scientific innovation in the offing, a band of like-minded scientific researchers recently converged at Georgia Tech's International Symposium for Biologically-Inspired Design and Engineering, to share their biologically inspired research.

As relative newcomers to this planet, humans have a love-hate relationship with nature. We're critical of what we consider to be biological flaws, vulnerabilities and peculiarities, such as the human spine, disease, and the platypus, respectively. But despite our ever constant desire to do better than nature, we recognize that evolution has had an immense head start as far as biological design goes. To an engineer, each time an organism adapts to changing environmental conditions it represents a successful design solution, providing no less than its continued existence as proof of success. "The natural selection and evolution of species provides us with the longest engineering design test of all time," said Jeannette Yen, professor in Georgia Tech's School of Biology. "By studying how organisms solve the problems they face, we get to benefit from the millions of years of knowledge embedded in the DNA of each creature." Evolution may be a hard act to follow, but follow it we must if engineers are to devise cleaner, simpler and more efficient technologies for the future.

The guiding philosophies and goals of biologically inspired design, as laid out by the symposium's Georgia Tech hosts, are to understand and transfer knowledge of biological systems to the industrial and engineering sectors. Facilitating this process is contingent upon: "inter-disciplinary collaborations between the biological, engineering and the industrial communities," say the organizers. Encouragingly, the outcome of the symposium seems to have matched the spiel and the expectations that it engendered. Many major international scientific institutions presented their bio-inspired research at the symposium - including: Caltech, Case Western, UC Berkley, Max Planck Institute for Metals Research, Shandong University and the University of Illinois and, of course, Georgia Tech - and their collective contributions and feedback since the presentations have been very positive.

Brandon Rutter, from Dr. Roger D. Quinn's biologically inspired robotics team, commented that while the quality of presentations could have done with some improvement, the symposium was an "eye opening experience," and the content fascinating. "There did not appear to be any presentations just for presentations' sake, which was refreshing. Though there may have been one or two poorly delivered presentations, I found all of them to have interesting content, and that is impressive," said Rutter. Rutter's own presentation included new results from his�work on control of muscle-like actuators on a robotic limb.

There were, as you'd expect, a number of robotics presentations at the symposium. One of these included a report by Steve DeWeerth and Lena Ting, faculty members in the Wallace H. Coulter Department of Biomedical Engineering at Georgia Tech and Emory University, detailing their attempts to try and find a better way to control legged-robots and human prostheses. Their research involves extensive research of the nervous system and how it communicates with joints and muscles for balance and movement. They then intend to apply this new knowledge to more faithfully replicate the natural movement of animals and humans in mechanical systems. In time, the team hopes to be able to not only build a better robot, but also produce human prosthetics that mimic the movement of real limbs.

Another presentation, by Stanislav Gorb, of the Evolutionary Biomaterials Group at the Max Planck Institute, included findings on "hairy systems." Hairy attachment systems are an area of interest because they demonstrate excellent adhesion and high reliability of contact. Hairy attachment systems, commonly associated with insects, have the advantage of not needing to introduce supplementary fluids to aid adhesion, and may have inherent properties that are advantageous over "smooth systems," explains Gorb. "Interestingly, hairy systems have appeared several times in animal evolution and at least three times independently within insect evolution. This fact may indicate that such a design of surfaces must have an advantage for adhesion enhancement not only in biological systems, but also on artificial surfaces," he added.

Gorb's team also discovered a way to maximize adhesion in hairy systems, using what is known as JKR theory. Drawing from comprehensive studies into these systems, Gorb found that: "the size of single contacting points gets smaller and their density increases as the body mass increases." According to Gorb, JKR theory works on a simple principle: "splitting up the contact into finer sub-contacts increases adhesion." If the integrity of two surfaces is reliant upon only one contact, that adhesion is more vulnerable to dust and other foreign material breaking the bond. Gorb says that such theoretical concerns have only been experimentally proven recently, but we all know that Spiderman has been doing it for years.

Some prior dabbling in biomimetics notwithstanding, the collaboration between major scientific heavyweights trying to adapt nature's designs to human systems begs the question "why hasn't this happened sooner?" It is, after all, the interaction between different organisms that has so far been conducive to change and adaptation. Perhaps researchers have coveted their work for fear of losing recognition, which is fair enough, but the complexity of biological organisms demands cooperation from those researching their nuances. The symposium is, however, encouraging in that many institutions are taking biomimetics very seriously, and have vision enough to see the benefits that could emerge from further collaborative research. As Brandon Rutter commented: "I was surprised by the broad range over which 'Biological Inspiration' is being applied to design in science and engineering, and particularly regarding how some institutions are making efforts to formalize this approach. In fact, I found that to be quite exciting."