Basic Instinct Not So Basic After All 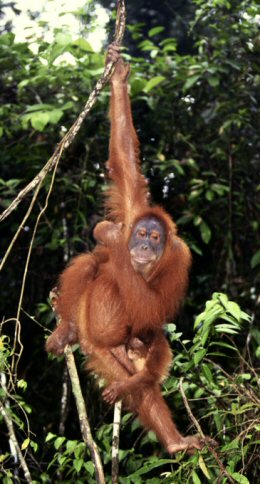 A number of recent studies examining ape cognition in areas like tool and syntax usage have turned up some remarkable findings. But researchers from the Max Planck Institute for Evolutionary Anthropology have been taken to task over one of their studies, "Apes Save Tools for Future Use", that focused on the forward planning capabilities of apes. Critics condemned their paper, published in Science this month, as it suggested that forward planning was a trait exclusive to great apes and humans. What about animals that hibernate, or store food for later use, asked the critics? Fair questions, but perhaps we should also think about what constitutes an instinctive as opposed to planned behavior.

The idea that only great apes and humans have a forward planning ability does seem to be a stretch, given that a simple definition of forward planning is a "long" delay between an action and being rewarded for it. Your dog can bury a bone for later consumption, birds know when to fly to warmer climes, and bears hibernate for the winter, so ascribing forward planning to species appears to be very simple. But it is, in fact, not that simple at all.

It may be useful to consider exactly what the Max Planck researchers claim they observed. In their paper, Nicholas J. Mulcahy and Josep Call say they found that "bonobos and orangutans selected, transported, and saved appropriate tools above baseline levels to use them 1 hour later," and that these results "extended to a 14-hour delay between collecting and using the tools." They also observed that: "seeing the apparatus during tool selection was not necessary to succeed," with their final conclusion suggesting that: "the precursor skills for planning for the future evolved in great apes before 14 million years ago, when all extant great ape species shared a common ancestor. Our results suggest that future planning is not a uniquely human ability, contradicting the notion that it emerged in hominids only within the past 2.5 to 1.6 million years."

Leaving aside what the team was trying to establish from the outset, which was to show that forward planning predated humans, do the critics have a point about other species showing evidence of forward planning?

The distinction between forward planning and instinctive behavior is, admittedly, a hotly contested and controversial issue, and one that the Max Planck researchers seem to have unwittingly tapped into. Some instinctive behaviors are inherited complex behaviors, and are not examples of forward planning at all. What would we call the complicated mating rituals involving dances and other forms of display among birds and other species of animals (including ourselves)? Are these instinctive or planned, or do instincts initiate an organism's planning of complex actions?

Experts in the fields of cognition and evolutionary psychology have attempted to break down the components of instinctive behaviors. The first of these is called key stimuli (KS), which can be described literally as a red-rag-to-a-bull. KS is a species specific stimulus that provokes a particular response in an organism via what is called an innate releasing mechanism (IRM) that triggers a fixed action pattern (FAP). The IRM can be a hormonal, visual or muscular mechanism that will initiate a FAP, such as "hiding" (a FAP) after "seeing" (an IRM) a predator. As well as acronym overload, it can all get rather complicated in the wild as well, as FAPs can actually be another animal's KS, either within the same, or another, species of animal. This can be illustrated by taking another look at birds engaged in a complex mating display. As one bird shows off their FAP, the other is responding to it as their KS.

One of the most important factors defining a FAP is that once begun, the entire action or task sequence must be carried out to completion. Fight-or-flight responses and incubating an egg could be examples of short and long FAP sequences respectively. But what does this mean for primate cognition and forward planning? Mulcahy and Call's study showed that apes could engage with a tool based task using an appropriately chosen tool to reach grapes and juice bottles (a KS), and then showed how the apes kept and reused their tool of choice some hours later. If we dismiss this as merely an instinctive behavior brought on by a KS, then perhaps we should question the reasons for our own so called planning ability. The alternative is that we say that these demonstrations represent a special kind of forward planning specific only to apes and humans, and quite different to the FAPs associated with other species of animals.

So, taking all this into consideration, can we at this point say with any confidence that a bird protecting its food cache, a squirrel storing food, or a bear hibernating for the winter be considered planned behavior comparable to that of humans and apes? It is easy to classify these behaviors as instinctive, because there is most likely an identifiable KS that initiates these inherited, instinctive behaviors in a species. A change in climate temperature would provide the KS in the examples provided above, and a similarly simple KS could probably explain many non-primate behaviors. But perhaps we could also argue that the distinction is arbitrary, and explain away both human and ape forward planning as a much more sophisticated set of FAPs initiated by a KS. Are all organisms just running on automatic, with the cognitive hierarchy of FAPs among species determined by relative brain size and complexity? Unfortunately, most of us would find this deterministic scenario a little disconcerting, but it would appear that it is unlikely to be resolved one way or the other anytime soon.