"Molecules" made of light may be possible, say physicists 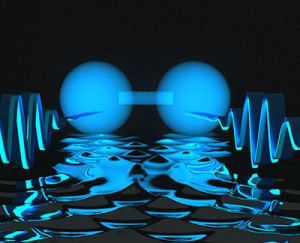 A team including theoretical physicists from the National Institute of Standards and Technology (NIST) has taken a step toward building objects out of photons, and the findings hint that weightless particles of light can be joined into a sort of "molecule" with its own peculiar force.

"It's not a molecule per se, but you can imagine it as having a similar kind of structure," says NIST's Alexey Gorshkov. "We're learning how to build complex states of light that, in turn, can be built into more complex objects. This is the first time anyone has shown how to bind two photons a finite distance apart."

But Gorshkov says he is not optimistic that Jedi Knights will be lining up at NIST's gift shop for light sabers anytime soon. The main reason is that binding photons requires extreme conditions difficult to produce with a roomful of lab equipment, let alone fit into a sword's handle. Still, there are plenty of other reasons to make molecular light - humbler than light sabers, but useful nonetheless.

"Lots of modern technologies are based on light, from communication technology to high-definition imaging," Gorshkov says. "Many of them would be greatly improved if we could engineer interactions between photons. Binding and entangling photons could allow computers to use photons as information processors, a job that electronic switches in your computer do today."

Not only would this provide a new basis for creating computer technology, but it also could result in substantial energy savings. Phone messages and other data that currently travel as light beams through fiber optic cables has to be converted into electrons for processing - an inefficient step that wastes a great deal of electricity. If both the transport and the processing of the data could be done with photons directly, it could reduce these energy losses.