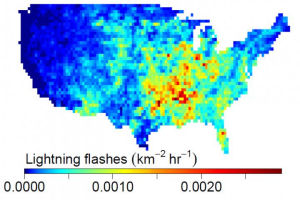 "With warming, thunderstorms become more explosive," said Romps. "This has to do with water vapor, which is the fuel for explosive deep convection in the atmosphere. Warming causes there to be more water vapor in the atmosphere, and if you have more fuel lying around, when you get ignition, it can go big time."

While some studies have shown changes in lightning associated with seasonal or year-to-year variations in temperature, there have been no reliable analyses to indicate what the long-term future may hold. Romps hypothesized that two atmospheric properties - precipitation and cloud buoyancy - together might be a predictor of lightning, so he looked at observations during 2011 to see if there was a correlation.

Precipitation - the total amount of water hitting the ground in the form of rain, snow, hail or other forms - is basically a measure of how convective the atmosphere is, he said, and convection generates lightning. The ascent speeds of those convective clouds are determined by a factor called CAPE - convective available potential energy.

"CAPE is a measure of how potentially explosive the atmosphere is, that is, how buoyant a parcel of air would be if you got it convecting, if you got it to punch through overlying air into the free troposphere," Romps said. "We hypothesized that the product of precipitation and CAPE would predict lightning. We were blown away by how incredibly well that worked to predict lightning strikes."

Exactly why CAPE increases as the climate warms is still an area of active research, Romps said, though it is clear that it has to do with the fundamental physics of water. Warm air typically contains more water vapor than cold air; in fact, the amount of water vapor that air can "hold" increases exponentially with temperature. Since water vapor is the fuel for thunderstorms, lightning rates can depend very sensitively on temperature.

On average, the models predicted an 11 percent increase in CAPE in the U.S. per degree Celsius rise in global average temperature by the end of the 21st century. Because the models predict little average precipitation increase nationwide over this period, the product of CAPE and precipitation gives about a 12 percent rise in cloud-to-ground lightning strikes per degree in the contiguous U.S., or a roughly 50 percent increase by 2100 if Earth sees the expected 4-degree Celsius increase (7 degrees Fahrenheit) in temperature. This assumes carbon dioxide emissions keep rising consistent with "business as usual."

More lightning strikes mean more human injuries; estimates of people struck each year range from the hundreds to nearly a thousand, with scores of deaths. But another significant impact of increased lightning strikes would be more wildfires, since half of all fires - and often the hardest to fight - are ignited by lightning. More lightning also would likely generate more nitrogen oxides in the atmosphere, which exert a strong control on atmospheric chemistry.