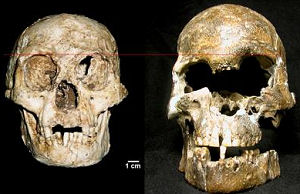 Back in 2004, the excavation of unusual skeletal remains in Liang Bua cave on the island of Flores yielded what the discoverers claimed was "the most important find in human evolution for 100 years." But Homo floresiensis (nicknamed the hobbit) may not be a new human species at all, say the authors of a new paper appearing in the Proceedings of the National Academy of Sciences.

Much of the initial excitement amongst anthropologists in 2004 stemmed from the hobbit's unusual anatomical characteristics. The reported cranial volume of only 380 milliliters (23.2 cubic inches) suggested a brain less than one third the size of an average modern human's; and its short thigh bone, which indicated the creature was only 1.06 meters (about 3.5 feet) tall.

But the new analysis disputes these figures. "The original figures for cranial volume and stature are underestimates, markedly lower than any later attempts to confirm them," said Eckhardt, who claims to have consistently found a cranial volume of about 430 milliliters (26.2 cubic inches).

Eckhardt goes on to point out that the original estimate of 3.5 feet for the creature's height was based on extrapolation combining the short thigh bone with a formula derived from an African pygmy population. "But humans with Down syndrome also have diagnostically short thigh bones," he notes.

The new analysis also points to several other features that Eckhardt says indicate a developmental abnormality. "The first indicator is craniofacial asymmetry, a left-right mismatch of the skull that is characteristic of this [Down syndrome] and other disorders," he notes. Additionally, he argues that the short thigh bones not only match the height reduction seen in Down syndrome, but when corrected statistically for normal growth, yield a stature of about 1.26 meters, or just over four feet, a figure he says is matched by some humans now living on Flores.

"Are the skeletons from Liang Bua cave sufficiently unusual to require invention of a new human species? Our reanalysis shows that they are not," Eckhardt concludes. "The less strained explanation is a developmental disorder. Here the signs point rather clearly to Down syndrome, which occurs in more than one per thousand human births around the world."