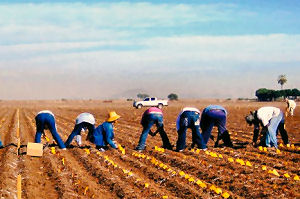 Field tests by University of California - Davis scientists have shown conclusively that rising levels of carbon dioxide inhibit plants' ability to assimilate nitrates into proteins. The findings, published in the journal Nature Climate Change, indicate that the nutritional quality of food crops such as wheat, barley, rice, and potatoes is at risk as climate change intensifies. Wheat alone provides about a quarter of all protein in the global human diet.

"Food quality is declining under the rising levels of atmospheric carbon dioxide that we are experiencing," said the study's lead author Arnold Bloom. "Several explanations for this decline have been put forward, but this is the first study to demonstrate that elevated carbon dioxide inhibits the conversion of nitrate into protein in a field-grown crop."

The assimilation of nitrogen plays a key role in plants' growth and productivity. In food crops, it is especially important because plants use nitrogen to produce the proteins that are vital for human nutrition.

"These field results are consistent with findings from previous laboratory studies, which showed that there are several physiological mechanisms responsible for carbon dioxide's inhibition of nitrate assimilation in leaves," Bloom said.