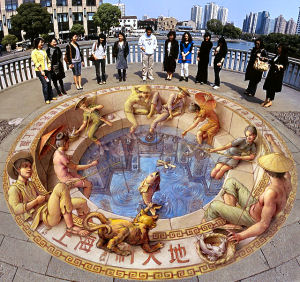 To create an entirely new way to compress data, UCLA researchers drew inspiration from physics and the arts. The technique, dubbed “anamorphic stretch transform,” (AST) works by stretching and warping the data using a newly developed mathematical function that the researchers say operates in both the analog and digital domains.

Reporting their work in the journal Applied Optics, the team claim their technique outperforms existing compression algorithms, such as JPEG. Additionally, they say that the technique can process massive amounts of data in real time. This may make AST ideal for use in data communication, scientific research, and medicine, research fields that generate huge quantities of data at rates that are too fast to be converted into digital data in real time.

Research leader Bahram Jalali said AST “reshapes the signal carrying the data” in a similar fashion to the graphic art technique known as anamorphism (pictured above, where an image on the pavement is distorted in such a way that it is properly visible only when viewed from a certain angle). “Reshaping the data by stretching and wrapping it in the prescribed manner compresses it without losing pertinent information,” he explained. “It emulates what happens to waves as they travel through physical media with specific properties. It also brings to mind aspects of surrealism and the optical effects of anamorphism.”

The new technique has its origin in another technology pioneered by Jalali’s group, time stretch dispersive Fourier transform, a method for slowing down and amplifying faint, but very fast, signals so they can be detected and digitized in real time.

“The technique does not require prior knowledge of the data for the transformation to take place; it occurs naturally and in a streaming fashion,” said co-researcher Mohammad Asghari. “Our transformation causes feature-selective stretching of the data and allocation of more pixels to sharper features where they are needed the most. For example, if we used the technique to take a picture of a sailboat on the ocean, our anamorphic stretch transform would cause the sailboat’s features to be stretched much more than the ocean, to identify the boat while using a small file size.”

The researchers say AST can be used for image compression as a standalone algorithm, or combined with existing digital compression techniques to enhance speed or quality or to improve the amount images can be compressed. They also claim that AST can outperform the JPEG image compression format, with a “dramatic improvement in terms of image quality and compression factor.”