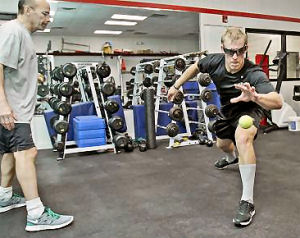 Professional hockey players who trained with special eyewear that only allowed them to see the action intermittently recorded an 18 percent improvement in on-ice skills. The players, from the NHL's Carolina Hurricanes, were part of a Duke University study that is reported in this month's edition of Athletic Training & Sports Health Care.

"From a sports perspective, you want to know if something is going to be an actual, viable training tool," said lead researcher Stephen Mitroff. "If players train with it, will they likely get the benefits? Our previous work showed that stroboscopic training affected vision and attention, and here we explored if those changes can benefit sports performance."

During training, the eyewear's lenses alternated at different rates, always with a clear state for a tenth of a second, and various opaque states ranging in intervals from 67 milliseconds to nine-tenths of a second.

Mitroff claims the players who trained with the strobe eyewear experienced an 18 percent performance improvement in a series of on-ice skill tests. The control group showed no change. "That 18-percent improvement for on-ice skills for professional players is huge," he said. "This is a dramatic improvement observed in professional athletes."

Related:
Discuss this article in our forum
Oscar Pistorius' artificial limbs provide "major advantage for sprinting"
The color red provides speed and strength boost
Lactic Acid Not The Culprit In Muscle Fatigue
Up, Up And Away For Athletes Taking Viagra