You are here: Home › Technology › Bio Inspired › News › Penguin propulsion could drive marine vessels
By Will Parker on November 17, 2013 in Bio Inspired, News 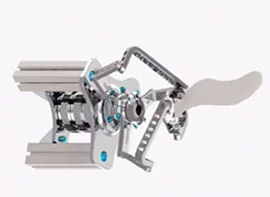 Scientists have created a highly efficient and extremely maneuverable propulsion system by mimicking the shoulder of an Emperor penguin. The mechanism, which features an innovative spherical joint with three actuated degrees of freedom, could lead to new types of propellers that have directional thrusting capability.

Caltech’s Flavio Noca was inspired to design the device after watching the IMAX movie Antarctica, which showed how Emperor penguins can accelerate underwater from 0 to 7 meters/second in less than a second. Noca will be demonstrating the penguin-inspired propulsion system next week at the American Physical Society’s Division of Fluid Dynamics meeting in Pittsburgh.

Based on a penguin’s shoulder-and-wing system, the mechanism features a spherical joint that enables three degrees of freedom and a fixed center of rotation. “Unlike an animal shoulder joint, however, this spherical joint enables unlimited rotational range about the main shaft axis like a propeller,” Noca explained.

To achieve this, the researchers needed to overcome the technical challenges of spherical joints, such as the lack of rigidity and the inability to generate high torques. The researchers cleared these hurdles by using a “parallel robotic architecture,” which Noca says enables rigidity as well as high actuation frequencies and amplitudes.

“Because the motors are fixed, inertial forces are lower than for a serial robotic mechanism, such as a multi-joint arm,” explains Noca. “The resulting spherical parallel mechanism with coaxial shafts was designed and manufactured with these specifications: a fixed center of rotation (spherical joint), a working frequency of ~2.5 Hz under charge, an unlimited rotation about the main axis, and an arbitrary motion within a cone of /- 60 degrees.”

Aside from the technological perspective, the manner in which penguins swim is still poorly understood, according to Noca. “By accurately reproducing an actual penguin wing movement, we hope to shed light on the swimming mysteries of these underwater rockets,” he said.

Related:
Discuss this article in our forum
Watch a video of the device
Naked chicks baffle penguin boffins
Penguins counted from space
Survival Of The Cutest