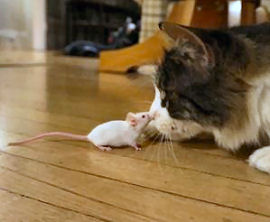 The Toxoplasma gondii parasite's ability to hijack the mammalian brain is well documented, but in an intriguing twist, scientists say that the effects from infection may be permanent.

The parasite is best known for making infected mice lose their fear of cats, which is good for both cats and the parasite, because the cat gets an easy meal and the parasite gets into the cat's intestinal track, the only place it can sexually reproduce and continue its cycle of infection.

In humans, it can cause spontaneous abortion in pregnant women and kill those with compromised immune systems. It is also thought that it may be implicated in schizophrenia and a range of human behaviors, including suicide.

Now, new research from the University of California, Berkeley, reveals that the effects may persist long after the parasitic infection is cleared from the body. "Even when the parasite is cleared and it's no longer in the brains of the animals, some kind of permanent long-term behavior change has occurred, even though we don't know what the actual mechanism is," researcher Wendy Ingram said.

Ingram became interested in T. gondii after reading about its behavior-altering effects in rodents and possible implications for its common host, the domesticated cat, and even humans. One-third of people around the world have been infected with T. gondii and probably have dormant cysts in their brains, kept in check by the body's immune system.

With co-researchers Michael Eisen and Ellen Robey, Ingram set out three years ago to discover how T. gondii affects mice's hard-wired fear of cats. She tested mice by seeing whether they avoided bobcat urine, which is normal behavior, versus rabbit urine, to which mice don't react. While earlier studies showed that mice lose their fear of bobcat urine for a few weeks after infection, Ingram showed that the three most common strains of T. gondii make mice less fearful of cats for at least four months.

Using a genetically altered strain of T. gondii that is not able to form cysts and thus is unable to cause chronic infections in the brain, Ingram demonstrated that the effect persisted for four months even after the mice completely cleared the microbe from their bodies. She is now looking at how the mouse immune system attacks the parasite to see whether the host's response to the infection is the culprit.

The findings appear to refute - or at least make less likely - models in which the behavior effects are the result of direct physical action of parasites on specific parts of the brain.

The researchers speculate that the parasite could damage the smell center of the brain so that the odor of cat urine can't be detected. The parasite could also directly alter neurons involved in memory and learning, in effect, performing its own version of brain surgery.

"The idea that this parasite knows more about our brains than we do, and has the ability to exert desired change in complicated rodent behavior, is absolutely fascinating," Ingram said. "Toxoplasma has done a phenomenal job of figuring out mammalian brains in order to enhance its transmission through a complicated life cycle."