To counter this, Ozcan's microscope attachment uses a color filter, an external lens, and a laser diode that illuminates the sample at a steep angle of around 75 degrees. This oblique illumination avoids the problem of scattered light detection that would otherwise interfere with the fluorescent image. All the components are housed in a 3D printed case that attaches to the phone. 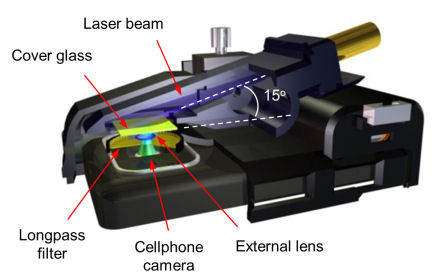 Using the device, Ozcan's team was able to detect single human cytomegalovirus (HCMV) particles. HCMV is a common virus that can cause birth defects such as deafness and brain damage and can hasten the death of adults who have received organ implants, who are infected with the HIV virus, or whose immune systems have otherwise been weakened. A single HCMV particle measures about 150-300 nanometers (a human hair is around 100,000 nanometers thick). 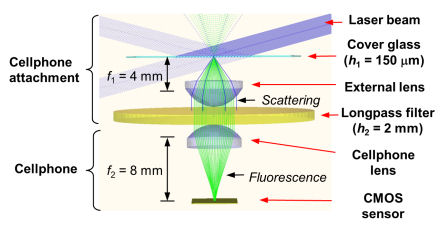 In a separate experiment, the researchers also detected nanoparticles as small as 90-100 nanometers. The team used a scanning electron microscope and a photon-counting confocal microscope to verify the new device's imaging capabilities.

"These results constitute the first time that single nanoparticles and viruses have been detected using a smartphone-based, field-portable imaging system," noted Ozcan, who envisages that the device could be used for the detection of bacteria and viruses in remote and resource-limited environments.