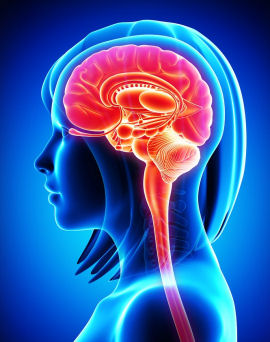 New research appearing in The Journal of Neuroscience shows that during prolonged stress, cells from the immune system are recruited to the brain and promote symptoms of anxiety. The findings, from experiments with mice, offer a new explanation of how stress can lead to mood disorders. They also identify a subset of immune cells, called monocytes, that could be targeted by new drugs for the treatment of mood disorders.

Unlike an infection, trauma or other problems that attract immune cells to the site of trouble in the body, this recruitment of monocytes that can promote inflammation doesn't damage the brain's tissue - but the researchers say it does lead to symptoms of anxiety. The monocytes, they explain, surrounded blood vessels and penetrated brain tissue in several areas linked to fear and anxiety, including the prefrontal cortex, amygdala and hippocampus, and their presence led to anxiety-like behavior in the mice.

Perhaps most importantly, the Ohio State University study also reveals new ways of thinking about the cellular mechanisms behind the effects of stress, identifying two-way communication from the central nervous system to the rest of the body and back again, that ultimately influences behavior.

The mice in the study were subjected to stress that might resemble a person's response to persistent life stressors. For example, male mice living together are given time to establish a hierarchy, and then an aggressive male is added to the group for two hours. This elicits a "fight or flight" response in the resident mice as they are repeatedly defeated. The experience of social defeat leads to submissive behaviors and the development of anxiety-like behavior.

Mice subjected to zero, one, three or six cycles of this social defeat were then tested for anxiety symptoms. The more cycles of social defeat, the higher the anxiety symptoms; mice took longer to enter an open space and opted for darkness rather than light when given the choice. Anxiety symptoms corresponded to higher levels of monocytes that had traveled to the animals' brains from the blood.

Additional experiments showed that these cells did not originate in the brain, but traveled there from the bone marrow. In previous studies, the same researchers showed that cells in the brain called microglia (the brain's first line of immune defense) are activated by prolonged stress and are partly responsible for the signals that call up monocytes from the bone marrow.

"There are different moving parts from the central and peripheral components, and what's novel is them coming together to influence behavior," said study co-author Jonathan Godbout. Exactly what happens at this point in the brain remains unknown, but the research offers clues. The monocytes that travel to the brain don't respond to natural anti-inflammatory steroids in the body and have characteristics signifying they are in a more inflammatory state. These results indicate that inflammatory gene expression occurs in the brain in response to the stressor.

"The monocytes are coming out of the bone marrow and they are not responsive to steroid regulation, so they overproduce proinflammatory signals when they're stimulated. We think this is the key to the prolonged anxiety-like disorders that we see in these animals," co-researcher John Sheridan explained.

These findings do not apply to all forms of anxiety, Sheridan noted, but "they are a game-changer in research on stress-related mood disorders."

"Our data alter the idea of the neurobiology of mood disorders," added researcher Eric Wohleb. "These findings indicate that a bidirectional system rather than traditional neurotransmitter pathways may regulate some forms of anxiety responses. We're saying something outside the central nervous system - something from the immune system - is having a profound effect on behavior."