You are here: Home › Technology › Chemistry › News › Cheap and simple desalination unit runs from battery
By Will Parker on June 27, 2013 in Chemistry, News 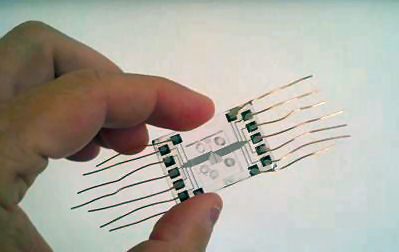 To achieve desalination, the researchers apply a small voltage (3.0 volts) to a plastic chip filled with seawater. The chip contains a microchannel with two branches. At the junction of the channel an embedded electrode neutralizes some of the chloride ions in seawater to create an “ion depletion zone” that increases the local electric field compared with the rest of the channel. This change in the electric field is sufficient to redirect salts into one branch, allowing desalinated water to pass through the other branch.

“This was a proof of principle,” explained researcher Kyle Knust, from The University of Texas at Austin. “We’ve made comparable performance improvements while developing other applications based on the formation of an ion depletion zone. That suggests that 99 percent desalination is not beyond our reach.”

If these engineering challenges are surmounted, the researchers foresee a future in which the technology is deployed at different scales to meet different needs – from small disaster relief arrays to municipal-scale units. They predict a small system about the size of a Coke machine could produce enough water for a small village.

The new method, which is patent-pending and in commercial development by startup company Okeanos Technologies, holds particular promise for the water-stressed areas in which about a third of the planet’s inhabitants live. Many of these regions have access to abundant seawater but not to the energy infrastructure or money necessary to desalt water using conventional technology.

“Current methods for desalinating water rely on expensive and easily contaminated membranes. The membrane-free method we’ve developed still needs to be refined and scaled up, but one day it might be possible to provide fresh water on a massive scale using a simple, even portable, system,” concluded lead researcher Richard Crooks, also from The University of Texas at Austin.

Nil by mouth: oral ingestion blamed for rapid rise of antibiotic resistance
Penicillin – not The Pill – behind the sexual revolution, suggests new analysis